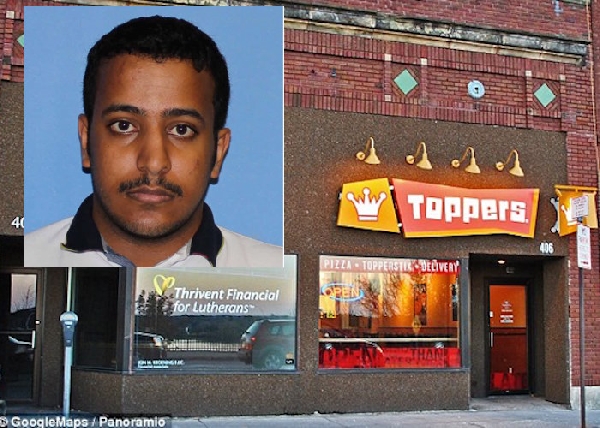 WISCONSIN – A University of Wisconsin student from Saudi Arabia was beaten to death outside a pizza shop by an unidentified, 6ft white man.
Police has yet to declare the incident as a hate crime.
Hussain Saeed Alnahdi was studying business administration at the University of Wisconsin Stout when he was attacked outside Toppers Pizza in Menomonie, Wisconsin, around 2a.m. Sunday morning.
The 24-year-old joined the university in 2015 after moving from Buraydah, Saudi Arabia, and was ‘so happy’ to be in America, friends said.
He was attacked by an unidentified, 6ft white male who ran away from the scene after beating him.  It is unclear what lead to the deadly confrontation.
He was bleeding from the mouth and nose when police found him outside the pizza shop.
Alnahdi was rushed to a local hospital, where he was in critical condition.
He died in the hospital on Monday from severe head injuries.
Tommy Hutson, Alnahdi’s close friend and roomate, said that Anahdi’s family back home is devastated by the news.
“Our deepest sympathies, thoughts and prayers go out to Hussain’s family in Buraydah, Saudi Arabia, and his friends at UW-Stout,” Chancellor Bob Meyer said. “I want to make a personal appeal to anyone on campus or in the community who might have information that would help authorities locate the individual involved in the attack to come forward.”
The Menomnie Police Department said they are investigated the incident.
“The motivation of the offender is unknown at this time,” Commander Todd Swartz of the Menomonie Police Department told NBC News. “It can’t be confirmed at this time whether this was a hate crime.”
University of Wisconsin professors have already expressed concern that the incident was a hate crime.
“I absolutely loved teaching the Saudi students who have come to Stout,” Genesea M. Carter, an assistant professor in the university’s English and philosophy department, wrote on Facebook. “Now I am deeply worried about my Saudi students’ safety.”
The council on Islamic American Relations (CAIR)’s Minnesota Chapter has said the incident has been brought to their attention and it will be “monitoring his death.”