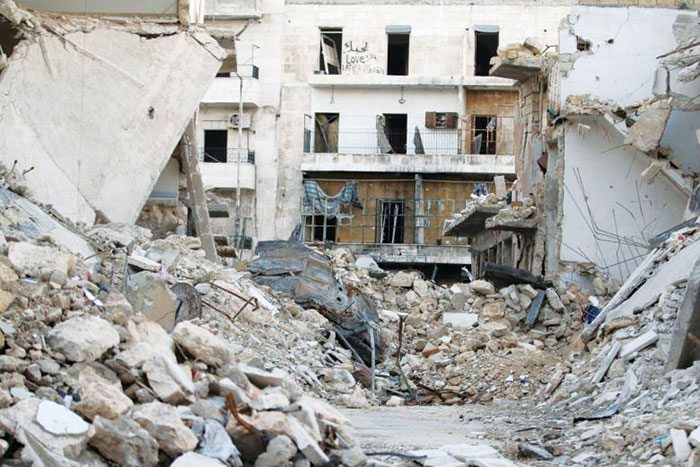 DAMASCUS — Syrian insurgents stepped up a week-long offensive on government-held areas in the city of Aleppo on Thursday, detonating three car bombs and firing shells which killed at least a dozen civilians, state media and a monitor said.

Rebel groups detonated three large car bombs near pro-government forces on the western edge of Aleppo, the Syrian Observatory for Human Rights and rebels said, as they tried to revitalize an offensive which has made little progress since taking most of Dahiyet al-Assad suburb on Friday.

A senior medic in government-held Aleppo told Reuters eight people had been brought into hospitals suffering from breathing difficulties thought to be from a poisonous gas attack.

Meanwhile, rebel factions fought each other in besieged eastern Aleppo on Thursday, officials from two of the groups and a war monitor said, potentially undermining their efforts to fend off a major Russian-backed offensive.

Rebel groups have been plagued by disunity and infighting throughout the 5 1/2-year-old conflict, for ideological reasons, over tactical differences or in disputes over territory.

Fighters of Jabhat Fateh al-Sham, Nour al-Din al-Zinki and Abu Amara attempted to seize positions and weapons from Fastaqim, one of its officials said. Fateh al-Sham was the official wing of al-Qaeda in Syria. Zinki and Fastaqim fight under the Free Syrian Army (FSA) banner.

Insurgent groups, including both Free Syrian Army factions and extremists, are seeking to break a government siege on rebel-held east Aleppo which has been almost continuously in place since July. They want to seize government-held areas of Aleppo in order to link the city’s east with rebel-held rural areas west of Aleppo.

The city has been divided for years between the government-held western sector and rebel-held east, where the army launched a major Russian-backed offensive in September that medics say has killed hundreds.

The army and Russia on Wednesday told rebels they should leave eastern Aleppo by Friday evening, signaling their temporary halt on air strikes in the city, which began on Oct 18, would extend until then.

Damascus has told rebels and residents of eastern Aleppo that they can have safe passage out of the city, either to other areas held by the opposition or to resettle in government areas, but rebels have rejected that and few people have left.