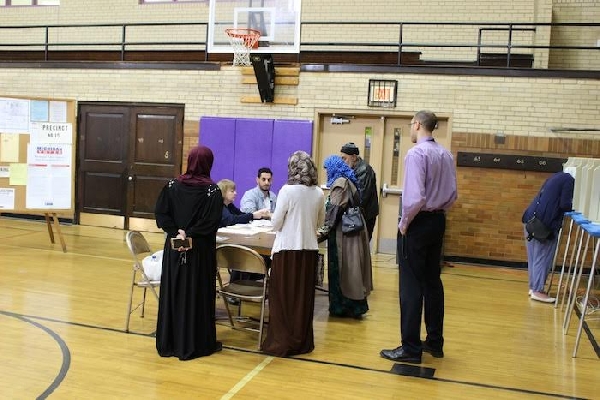 Michigan has long been a safe Democratic state in the
presidential elections for the past 24 years, but the unpredictability of this
cycle puts everything in doubt. A Fox 2 poll showed GOP candidate Donald Trump
is less than 3.3 percentage points behind Democrat Hillary Clinton — within the
margin of error.

Michigan is becoming a contested state, and your vote
could swing it to the red or blue side.

The Arab American vote can be decisive locally and
statewide, as evidenced by recent elections, including the historic victory of
Bernie Sanders in Michigan in March and the win of state rep. candidate
Abdullah Hammoud in Dearborn in August.

There is too much at stake to stay home on Nov. 8.
Vital races can be decided by you from the top of the ballot down to the
proposals.

Arab and Muslim communities are under attack. The
rise of hate crime, Islamophobic media campaigns and anti-immigration rhetoric
is frightening. The best way to respond to those who question Arabs and
Muslims’ Americanism is to fulfill the civic duty of voting on Tuesday.

The Clinton campaign’s efforts to reach out to Arab
Americans are the direct results of the March primaries, when the former
secretary of state did not court the Arab vote and lost Michigan.

Some citizens may find the scandal-ridden campaigns
and name calling nationally and locally discouraging. But voting is an act of
civility. It is a means to countering to the unpleasant campaigning.

Arab Americans need to participate and make their
presence known. This community is growing in numbers and the ballot box must
reflect that demographic growth, or else Arab Americans’ economic and
residential influence will be overlooked.

The AANews endorsed a list of 27 candidates for
various races last week. (See page 13 for an official sample ballot in Dearborn
with our endorsements checked off).

Because of the flaws of both major party candidates,
we did not endorse anyone for president. However, that does not mean that you
should not vote in this race of historic importance.

Other contests are also important. As highlighted
previously, this election cycle has been unpredictable. Although Dearborn’s
State House district is assumed to be a secure Democratic seat, Arab Americans
should come out in large numbers to support Abdullah Hammoud, who is clearly a
better candidate than his Republican opponent.

The judicial race and both the local and state school
board elections are also extremely important for the community’s future and the
education of future generations.

But community members should not vote based on
ethnicity or religious affiliation. Arab Americans cannot further isolate
themselves from their surroundings. This community has allies who have defended
civil liberties and advocated for the wellbeing of all residents.

Backing candidates because of their Arab last name puts
Arab Americans in a bubble.

How can the community ask non-Arab neighbors to back
its causes if Arab voters blindly grant their votes to Arab candidates only?

Arab Americans should vote based on merit, experience
and qualifications, in addition to the candidate’s sensitivity to the Arab
community.

While The AANews has always encouraged Arab American
political engagement, including running for office, it doesn’t mean that we
support any Arab candidate seeking office, based on race or national origin.
Qualifications are always among the main deciding factors for our endorsement.

It is true that Arab Americans have special interests
and sensitivities, but candidates who are better for the broader community will
always be the preferred choices.

Regardless
of whom you will vote for, head to the polls on Nov. 8 and cast your ballot.