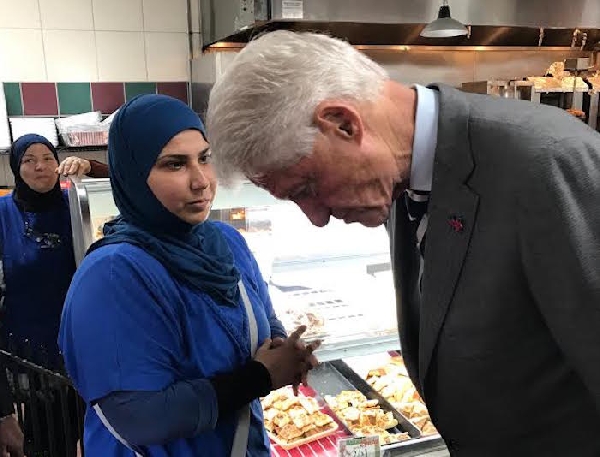 The 42nd President was in town following a rally in Lansing earlier in the afternoon, where he was campaigning for his wife and Democratic Presidential nominee Hillary Clinton.

Bill Clinton first made a stop at the Super Greenland Market located on Miller Rd., where he took a tour of the Middle Eastern grocery store and greeted star-struck customers as they were shopping.

One local woman told Bill that her brother was stuck in Syria, and asked if Hillary would be able to assist him in leaving the war-torn country, if she were elected President.

Bill promised that he would do everything he could to assist the woman’s brother, and had his aides take her contact info.

Bill then headed over to the Al-Ameer Restaurant across the street, where dining patrons literally dropped their silverware as he popped in.

Sawsan Azaz, who was having dinner with her family at the Middle Eastern cuisine restaurant , said she was delighted to have been at the right place at the right time.

“I was definitely taken away,” Azaz said. “I have always loved Bill Clinton. He is great. We had the best days during the Clinton times, so I will be voting for Hillary. The majority of us here are.”

Yunus Musa, an employee at Al-Ameer, said the staff had no clue that the former president would be making an appearance. Bill Clinton wasn’t able to dine at the restaurant because he had to catch a flight, but he did order falafel to go.

“No one had any idea,” Musa said. “It’s pretty crazy. A lot of people were very happy to see him. There was a bunch of smiles across the room. The whole staff got to see him and take a picture with him, which is pretty cool. Most of the staff working here believes that he was the best President that we’ve ever had.”

Congresswoman Debbie Dingell shadowed Bill Clinton as he spoke and took selfies with local residents during his stop at the two Arab American owned businesses.

Dingell encouraged the community to come out and vote on Election Day.

“What I’ve been the most worried about is that everyone thought it wouldn’t be a close race and their vote wouldn’t matter,” Dingell said.

“Everyone needs to know that their vote does matter. If they worry about what’s happening in this country, and if they don’t like the division and hate, then they need to go vote on Tuesday to ensure that evil and hatred doesn’t win.”

In Michigan, Hillary Clinton’s campaign has pulled out all the stops in the last several days leading up to the elections on November 8.

Hillary Clinton held a rally at Eastern Market in Detroit on Friday. The former Secretary of State also made an appearance at Millers Bar in Dearborn, where she was greeted warmly by bar-goers.

Hillary will return to Michigan on Monday where she will be holding a rally in Grand Rapids. President Barack Obama is also coming to campaign for her with an appearance in Ann Arbor on Monday morning.