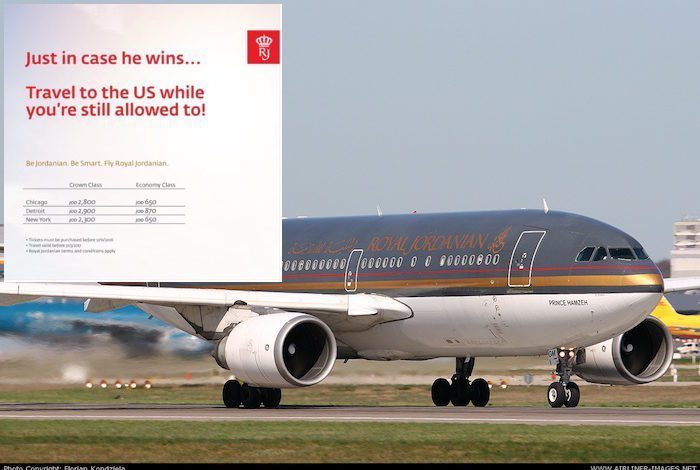 JORDAN – Just in case Donald Trump wins Tuesday’s US presidential election, a tongue-in-cheek Royal Jordanian airlines advertisement is offering last minute flights to Muslims in case they are subject to a ban from entering the US.

In a Twitter ad, Jordan’s flag carrier airline wrote, “Just in case he wins…Travel to the US while you’re still allowed to!”
The ad is poking fun at the Republican presidential candidate’s stance for a ban on Muslims entering the United States.

“Until we are able to determine and understand this problem and the dangerous threat it poses, our country cannot be the victims of horrendous attacks by people that believe only in Jihad, and have no sense of reason or respect for human life,” Trump said.

Trump campaign manager at the time, Corey Lewandowski, was asked in an email if the shutdown would apply specifically to immigration or more broadly to student visas, tourists, and other travelers to the United States, to which he replied “everyone.”

But in September, Trump slightly changed his position by saying he would suspend immigration to the United States from countries “where there is a proven history of terrorism” against the West, not singling out Muslims or other ethnic groups.

The airline is offering cheaper than usual flights to Detroit, Chicago and New York for just a limited time.