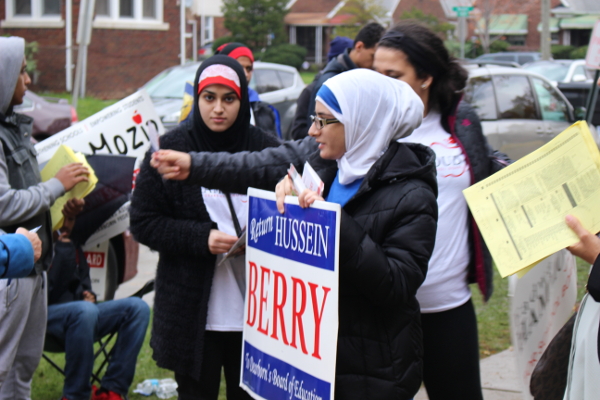 DEARBORN – Final election reports show that in Dearborn’s 48 precincts, 64% of registered voters turned out at the polls on Tuesday — that’s 40,116 of 61,829.  Of those, 73.2% (14,908) checked straight Democratic party on the ticket.
Dearborn residents leaned toward Hillary Clinton, as almost 63% (24,940) voted for the Democratic candidate.
Republican candidate Donald Trump received 30.7% (24,940) of the city’s votes.
In a close race, 50.4% (17,403) of Dearborn residents voted for attorney Gene Hunt over City Council President Susan A. Dabaja, who received 49.2% (16,982) of votes.
For Michigan’s State House Rep, 61.6% (21,739) of the city favored Abdullah Hammoud (Dem) over WWE star Terrance Guido Gerin (Rep).
At 33% and 32.5% respectively, Hussein Berry and Fadwa Hammoud won as Dearborn’s Public School Board members. Jim Thorpe received 63.3% of votes for the board’s partial term.
At the Crestwood School Board in Dearborn Heights, the Arab American community celebrated a victory with the election of Nadia Berry, who came in first place. The second open seat went to incumbent Ed Garcia.
In Dearborn, Ish Ahmed received most votes with running mate John Austin with 30.3% and 29.7%, respectively as members for the State Board of Education.
However, Tom McMillin and Nikki Snyder won across the state as Board of Education members.
Dearbornites helped re-elect U.S. House Rep. Debbie Dingell of the 12th district, as 68.5% (25,958) voted for their congresswoman.
Incumbent Wayne County prosecuting attorney Kym Worthy received 83.3% of Dearborn’s votes.