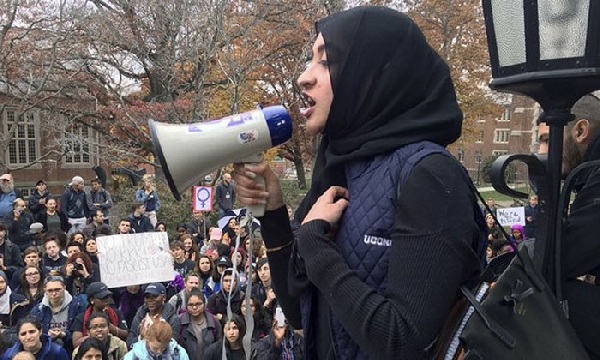 Arab and Muslim Americans have many good reasons to be fearful
of the Trump presidency. Donald Trump made fear and
xenophobia a central part of his campaign. This was a valid reason for Muslim and Arab Americans
to be apprehensive of his victory.

Even though a minute number of Muslim and Arab Americans voted
for Trump on Nov. 8, hoping that his offensive language and radical proposed
policies would be obliterated once he was victorious, a majority of the
community is fearing the worst– mainly for two reasons.

First, it is a gross violation of the U.S. Constitution to grant
or prevent entry to the country based on religion, race, sexual orientation or
color. Second, Muslims, like the rest of those who were insulted and threatened
by Trump’s offensive remarks, were hoping that after his victory speech, he
would embark on a mission to unite the country and erase the divisive overtones
of his campaign.

Muslims also know very well that the U.S. system of government
is built on check and balances. The power of the presidency is important, but
is not exclusive.

More than half of American voters cast their votes against the president-elect.
It is safe to assume that most American Muslims are among the majority.

Even those who voted for Donald Trump didn’t necessarily agree
with all of his policies and rhetoric. The goodness of the American spirit
didn’t surrender or die on November 8. In fact, it is exemplified in the
outpouring of protests against his actions. It has
spurred advocates across the nation to pledge to fight for the dignity of all
Americans.

Residents
in Lansing told their Muslim neighbors they reject Trump’s bigotry. Dozens of female students at a high school in Minnesota
stood in solidarity with a Muslim student who was feeling outcasted by showing
up wearing a hijab. Arab Americans and Muslim aren’t
alone and can’t sit on the sideline of this fight. They must be at the center
and the forefront of the battle to reclaim and protect our rights.

It is a sad fact that our nation is divided. It is also true
that the division is deeper and more dangerous than we have ever seen since the
American civil war era.

The demonstrations that swept the country after Trump’s victory
wasn’t orchestrated by political operatives, like he insinuated. It was a
popular movement in reaction to systematic corruption and policies that placed
Americans in a predicament to select “the lesser of two evils” as
their president.

And for many, Trump has become the face of a distorted nation.

Yes, Trump is the president-elect; and Americans, including
Arabs and Muslims, must bow to democracy and to the will of the voters and
abide by the result.

But, that doesn’t mean that we should surrender to bigotry, xenophobia and fear.
We must not succumb to an administration that intends to strip our rights and
drive us into hiding and humiliation. We owe it to America to stand up and join
the fight.

Trump’s initial pick to his administration rapidly eradicated
any hope that the campaign talk was just a rhetoric. It is already  sparking fears that we are heading into uncharted
and dangerous territory or –perhaps – setting us back 100 years.

A Trump advisor is pushing for a Muslim registry. Another
surrogate claims that the forced internment of Japanese Americans during world
War II sets a precedent for the Trump administration to create a registry for
Muslims living in the U.S.

These are challenging times. We the people know that the Constitution
protects all of us.

Arab Americans and Muslims have a greater responsibility today.
They should
redouble their efforts in building coalitions with other minority and ethnic
groups, locally and across the nation. It is imperative that we search for
common grounds with African Americans, Jewish Americans, Latinos, Asians and
others.