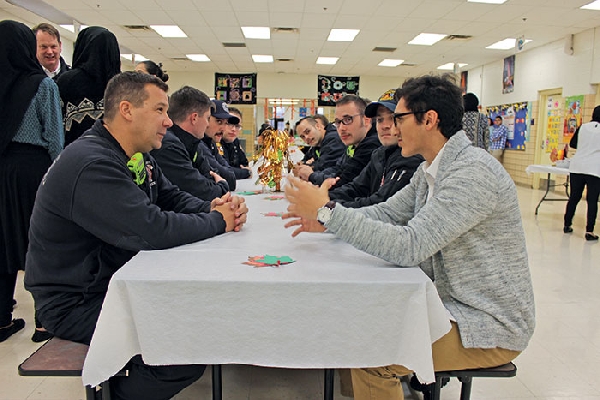 As Americans gather around the table this Thanksgiving holiday to share a meal and be thankful for what they have, they won’t just be discussing turkey, mashed potatoes and pumpkin pie.

Most likely, politics and the presidential election will be a divisive and bitter topic.  We are a divided nation like never before and it will most likely be felt around the Thanksgiving table.

Nothing less is expected on a Thanksgiving holiday for Arab American and Muslim families as they gather on this occasion after a very stressful election year.

Many of us are worried about what lies ahead for our country and our community. But we aren’t the only minority group that feels this way. Many of our neighbors and friends from other communities are worried as well. Immigrants of various religious affiliations and nationalities are fearing the unknown. Americans of every race, creed and color are feeling it.

We can’t discount the legitimate reasons that make people feel threatened. But at the same time, we have many reasons to celebrate Thanksgiving.

We should be thankful that we live in a nation governed by the rule of law and not by a totalitarian regime or a dictator. If you aren’t satisfied with this election, then you should organize, engage and prepare to vote again to effect a real change. What is good about the elections is that they come around often enough.

We should be thankful that we live in a country that continues to be immigrant friendly, despite isolationist voices and anti-immigrants advocates. America is still a welcoming nation for all immigrants, regardless of color and creed. Immigrants here are protected and have resources that will help them assimilate and realize their full potential to achieve their American dream.

We should be thankful that we live among many friendly and supportive communities that stood by us in the past and continue to stand by us now as we face an unprecedented wave of bigotry and hate. Last week, nearly 200 national civil and human rights, social justice and inter-faith organizations submitted a letter to President Obama, calling on his administration to rescind the regulatory framework behind the National Security Exit-Entry Registration System (NSEERS). NSEERS is a national security
registration program that resulted in civil liberties violations and zero known convictions for terrorism-related crimes.

We should be thankful that the First Amendment of the U.S. Constitution protects our rights to express our anger and our joy freely without censorship, and to practice our religious beliefs and assemble in our places of worship without fears of retributions from governments and organized groups.

Thanksgiving is not only the time to be thankful for what we have, but also it is a prime time for giving to others in need. We appreciate groups and individuals in our communities that have taken the time and put their efforts to feed the hungry and to shelter the homeless. There is a saying: If you can’t feed a hundred people, then just feed one.

“(The righteous are those) who feed the poor, the orphan and the captive for the love of God, saying: ‘We feed you for the sake of God Alone; we seek from you neither reward nor thanks.'” –  Quran, 76:8-9.

This holiday, let us unite around our shared values of freedom, of having a safe place to call home, of working together to heal our nation and make it a better country for all. Let us recognize our neighbors as people who cherish these same values. γ