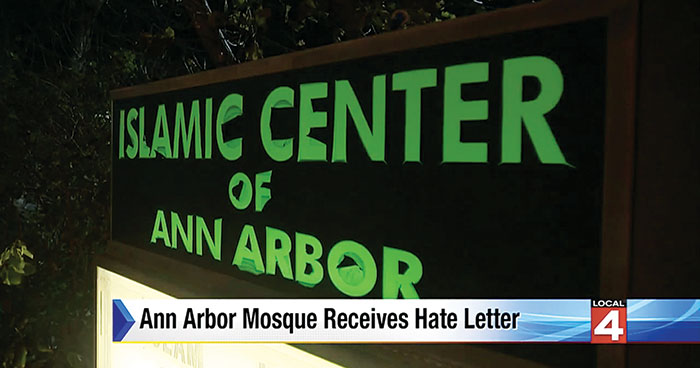 ANN ARBOR — A mosque in Ann Arbor reported that it received a hate letter from California—advising Muslims to leave the U.S. or else they’d face a massacre.

Similar letters stamped in Los Angeles have popped up at mosques all over the nation, including Michigan, California, Ohio, Rhode Island, Indiana, Colorado and Georgia.

According to The Detroit News, Dawud Walid, director of the Council on American-Islamic Relations’ Michigan chapter, said the the Muslim Community Association of Ann Arbor and Vicinity received the letter on Wednesday.

The letter stated that President-elect Donald Trump is “going to do to you Muslims what Hitler did to the Jews.” It was signed “Americans for a Better Way.”

“You Muslims would be wise to pack your bags and get out of Dodge,” it warned. “This is a great time for Patriotic Americans…”

The Council on American-Islamic Relations asked the FBI to investigate.

However, the FBI said the investigation is limited at this point because there is no specific threat in the letter, as offensive as it is, but they’re keeping an eye on the case. They also urged people to report any similar incidents.

Shehadeh Abdelkarim, president of the Islamic Center of Cleveland, said the name right above the return address is Reza Khan, indicating that it’s a Muslim name.