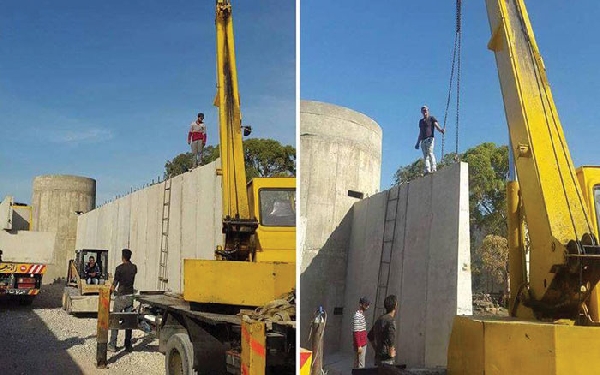 The Lebanese authorities are building a wall around the country’s largest Palestinian refugee camp. The one square kilometer (.385 mile) Ain Al-Hilweh is home to more than 80,000 refugees. Residents of the camp have likened the 14 ft. high wall and the four watchtowers to Israel’s infamous apartheid wall in the occupied West Bank and President-elect Donald Trump’s proposed controversial wall of separation on the U.S. border with Mexico.

The impoverished and overcrowded camp near the southern coastal city of Sidon has gained notoriety in recent years as a refuge for radical extremists.

In September, the Lebanese army said its security forces arrested a Palestinian refugee in the camp with suspected ties to ISIS.

The wall, which will take 15 months to complete, was part of an agreement between the Lebanese army and the different Palestinian factions in the refugee camp. According to Munir al-Maqdah, the head of the Joint Palestinian Security Forces, “The wall and watchtowers are being built for security concerns by the Lebanese army, which we accepted.”

But he was quick to note that this wall will have a negative impact. He told Sky News Arabia, “The psychological implications of a wall will be negative and difficult to overcome.” Despite being approved by Palestinian leadership in Ain al-Hilweh, for thousands living in the overcrowded camp, life will only worsen.

This wall will further escalate the already existing tension between the camp’s residents and the Lebanese security forces, which could spill over into a full-scale war that will consume the entire country. Furthermore, the wall will fester radicalization among the largely unemployed and angry youth in the camp and turn their disgust into an opportunity for extremist recruiters like ISIS and their like. It won’t provide real and long term solutions to the deteriorated security inside and around the camp.

More than a half million Palestinian refugees – around 10 percent of the Lebanese population – live in 12 camps in Lebanon. For decades, they have been treated as second-class residents, stripped from basic rights like owning property and blocked from seeking employment in a vast range of professions.

The living conditions inside the camps are unbearable. They include open sewers running through crowded neighborhoods and a nearby playground, substandard school facilities, inadequate medical care, frequent interruptions of power supplies and lack of drinking water. Wrapping high walls around refugees’ misery, making them feel like they’re living in a large prison, similar to the one in Gaza, is not how you treat a brethren, let alone a human being.

With walls and watchtowers around Ain Al-Hilweh similar to the ones built by the Israelis in the West Bank, Ain Al-Hilweh is starting to look like more as a concentration camp, not a refugee one. A Facebook group which covers news from the camp, “Aismat Shatat Ain Al Helwe” – Arabic for “Capital of diaspora Ain al-Hilweh” – shared photos of the construction of the wall outside of the camp. “Wall of shame,” the Facebook post read.

“This picture is not in occupied Palestine and the company building it is not Zionist,” the caption read. “This is a picture of the wall of shame, the racial separation wall that the Lebanese government has been building around Ain al-Hilweh camp.”

It is time to tear down walls and invest in building bridges, instead. Lebanese and Palestinians need to regroup, build alliances and regain broken trust. They have much more in common than differences. It is a crucial time to knock down the walls, reach out to those who are suffering from the dire living conditions in the camp and make their lives better. This is how you win the fight against extremism and encourage Palestinians to fight their struggle.

The suggestion that Palestinian refugees should not be afforded a decent life because it will make them forget their homeland is a ridiculous notion that has been proven wrong.

Palestinians have suffered enough at the hands of their brutal Israeli occupiers. While helping them fight for the right to return to their occupied homes in Palestine, refugees must be treated with respect and afforded equal rights to pursue their dreams. Doing so will immune future generations against extremism and radicalization. It will not sway them away from strife and struggle to return to their lawful land; instead it will encourage them and empower them to fight back and win their struggle for freedom and self determination.