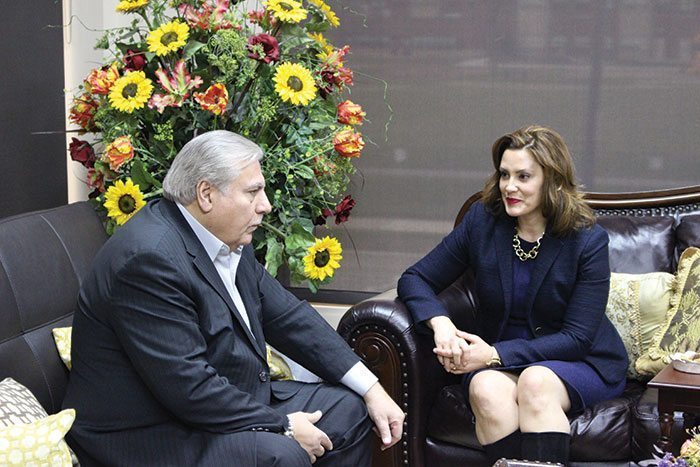 DEARBORN — Only a few months after the Nov. 8 elections, Gretchen Whitmer, the interim Ingham County prosecutor tasked with fixing a scandal-ridden office, said she is out do the same for Michigan.

Whitmer, a Democrat whose tenure in the prosecutor’s office ran from July to December, filed her candidacy for governor with the Secretary of State on Tuesday, Jan. 3. She said she’s ready to take on the challenges that have labeled incumbent Gov. Rick Snyder as unpopular.

The former Senate minority leader laid out a bare bones, yet significant platform on increasing economic opportunity for working class families, demonstrated in her visit to The AANews on the first day of her campaign.

For too long, we have had leaders who have failed us where we needed somebody to fight for economic opportunities for every single person in the state

“For too long, we have had leaders who have failed us where we needed somebody to fight for economic opportunities for every single person in the state,” Whitmer said.

She stressed the importance of government leaders being able to promise high quality education and updated infrastructure while “never cutting a corner and jeopardizing the health and safety of the people of the state.”

Whitmer unabashedly referred to poor decisions during Snyder’s tenure that led to the Flint water crisis, calling the man-made disaster a matter of governmental integrity.

“I am running for governor because I think we deserve a leader who is unafraid to talk to people about the real issues of the day,” she said. “Not to spin and try to politicize every problem, but to really seek solutions and pull a diverse group of people toward finding solutions to the issues that we face as a state.”

Following the conviction of former Ingham County Prosecutor Stuart Dunnings III, who had been charged with 11 counts of involvement with a prostitute and four counts of willful neglect of duty, Michigan’s 30th Judicial Circuit Court unanimously chose Whitmer to serve the remainder of  Dunnings’ term.

What they needed was someone to ensure the department was running with “integrity, accountability and transparency.”

She said now it is time for her to bring those qualities to the state level.

As Dearborn’s large immigrant community has always been founded on small businesses, Whitmer expressed enthusiasm on receiving feedback from Arab Americans and took note of the various issues they face.

In the midst of an environment that could deter individuals from participating in the political process — vital for minorities fighting for representation — Whitmer said the only way to change that perception and encourage individuals to run for office was to speak and fight for opportunities that elevate their chances to thrive.

While Whitmer was not ready to propose specific plans to remedy economic, education or leadership failures, she added that her goal will be to prioritize and build effective coalitions to ensure the issues are addressed responsibly.

When asked how she would deal with objections from constituents and a majority Republican legislature, as a fierce reproductive rights advocate and a Democrat, Whitmer said she was proud of the fights about “real core values” she has pursued.

“I have had a tendency to swim upstream for a long time,” she said. “I know what it is like to face assumptions about who I am and where I come from. I’ve learned to trust that when you are working hard and trying to do the right thing that is what you get judged on at the end of the day.”

Whitmer is so far the only candidate to file for the 2018 gubernatorial election. Other prospective candidates include U.S. Rep. Dan Kildee (D-Flint) and, on the Republican side, Attorney General Bill Schuette and Lt. Gov. Brian Calley.