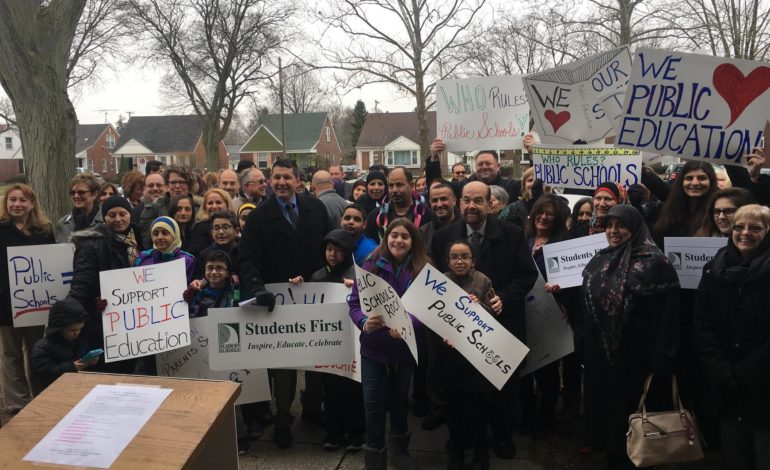 Administrators, teachers, parents and students gather outside the Administration building

DEARBORN — Many of Donald Trump’s cabinet nominees have been met with a wave of sharp criticism; and that holds especially true for Michigan’s  own Betsy Devos, Trump’s pick for Secretary of Education.

DeVos was the Republican National Committeewoman for Michigan from 1992 to 1997 and served as chairwoman of the Michigan Republican Party from 1996 to 2000, with reelection to the post in 2003.

She’s had a reputation for more than a decade for being an aggressive lobbyist in expanding charter, private and religious schools in the state; and now, with many worried that she’d bring that agenda to a national level, public school lobbyists are speaking out.

Superintendent Glenn Maleyko spoke about the importance of unity for the cause of public education, despite challenging times. He cited a teacher shortage and funding cuts on a national level.

Just two days earlier, Maleyko was in Lansing for Governor Snyder’s State of the State address. While there, he networked and lobbied for public education.

“It’s so important to champion public education,” Maleyko said. “We do have some challenges, but the great things I’ve seen locally when I go to schools— the wonderful things the students and staff are doing and the excitement I see— are fantastic.”

Nofila Haidar, president of the PTA Council, highlighted the importance of public education to Dearborn’s community, noting that 90 percent of children rely on it.

Haidar was critical of DeVos taking on the post of Secretary of Education, questioning some of her recent remarks.

“When the Secretary of Education cannot tell the difference between proficiency and growth, that’s sad,” Haidar said. “But we are united and we will prevail. We have dark days ahead, but we will overcome them.”

Other parents seemed irked by recent remarks DeVos made where she brushed off special education needs, suggesting that states should decide on those standards.

Christine Sipperley, president of Dearborn’s Federation of Teachers, said every student has a right to a free public education and that her organization’s goal will be to ensure that continues.“AFT is about reclaiming the promise of a quality education for all,” Sipperley said, referring to the American Federation of Teachers. “Dearborn Public Schools is here to inspire, educate and celebrate our students, our district and community.”

Maya Lewy, a student at Dearborn High School, said she and other students have launched a “We embrace” campaign at local schools to combat political upset.

“We embrace all things,” Lewy said. “That’s when we are truly united and that’s when we are at our strongest. Public education, as it does for all students, has given me the opportunity to grow in unimaginable ways. Not only have I grown academically, but I’ve learned a lot about myself along the way. Education is the key to discovery.”

Dearborn School Board Trustee Mary Petlichkoff told attendees that she has a role to represent the community and that she’s listening to their concerns about the education system.

The public school system takes whoever shows up. And they take them in whatever condition they are in and serves them amazingly well. And Dearborn is a good example. We are the most diverse community in the whole state of Michigan.

“We are determined in these uncertain times to continue to face those challenges in a manner that protects and preserves the public education system,” Petlichkoff said. “Because that is the only system that allows for any student of any ability to come through our doors and walk away as a contributing member of society. I can tell you there is no private institution that is going to guarantee those rights.”

Mayor Jack O’Reilly made an unexpected appearance at the event and told the crowd that Dearborn Public School is a leading example of a system that has harbored students from all backgrounds and all walks-of-life.

He noted that many charter schools in Michigan  are poorly managed and don’t guarantee the same benefits as a public education system.

O’Reilly highlighted the city’s student base, which ranges from those who have parents with college degrees to immigrants who come to the district with no educational background.

“This is a place that treats everyone equally,” O’Reilly said. “More importantly, the public school system takes whoever shows up. And they take them in whatever condition they are in and serves them amazingly well. And Dearborn is a good example. We are the most diverse community in the whole state of Michigan.”

Nabeel Althalaya, a Yemeni immigrant, told The AANews that he is thankful for what the public schools system has offered to his three children.

“Public education is important because it treats every student equal, despite their background,” Althalaya said. “I appreciate what Dearborn Public Schools has done to our students on all levels.”