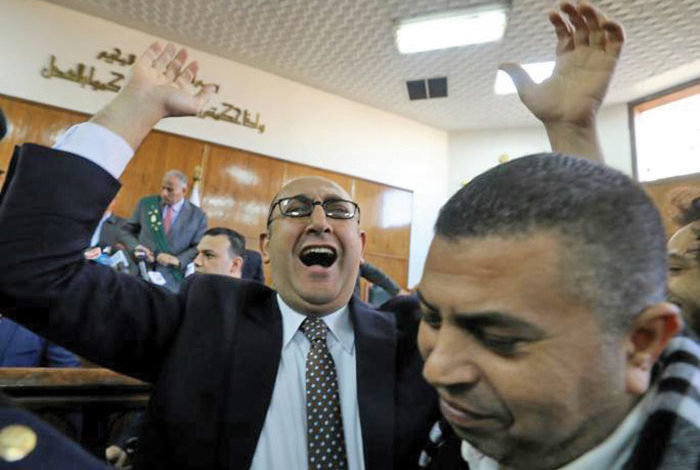 A leading human rights lawyer celebrating the ruling describing it as a "decisive".

CAIRO, Egypt — An Egyptian court rejected on Monday a government plan to transfer two uninhabited Red Sea islands to Saudi Arabia, in a final ruling that prompted cheers in the courtroom but could deepen tensions with the country’s former financial backer, Saudi Arabia.

Egypt’s government announced during a visit by the Saudi king in April a deal that would see it surrender control of Tiran and Sanafir, the two contended islands.

The deal prompted protests from Egyptians who said they had been taught in school that the islands belonged to them.

It has become a source of tension between Egypt and Saudi Arabia, which showered its ally with tens of billions of dollars in aid in recent years but suspended petroleum supplies in September amid growing differences.

Egypt’s government announced during a visit by the Saudi king in April a deal that would surrender control of Tiran and Sanafir, the two contended islands to the Saudis.

The court’s decision was based on “irrefutable evidence” as well as local and international practices which removed any doubt that the islands’ sovereignty belonged to Egypt alone, state news agency MENA said.

Two leading human rights lawyers had challenged the accord in Egypt’s administrative court system, which deals with cases involving the government and public entities.

One of them, Khaled Ali, called Monday’s verdict a “decisive” ruling.

“So it is not permissible for the president, or prime minister or parliament or cabinet or a referendum to give up this land,” Ali told Reuters. “It is Egyptian land and cannot be given up according to the Egyptian constitution.”

Celebrations erupted as the judge read out the ruling, with jubilant supporters carrying Ali and his colleague Malek Adly out of the courtroom.

Saudi and Egyptian officials had argued that the islands belonged to Saudi Arabia and were only under Egyptian control because Riyadh asked Cairo in 1950 to protect them.

But the lawyers who opposed the accord said Egypt’s sovereignty over the islands dated back to a treaty in 1906, before Saudi Arabia was founded.