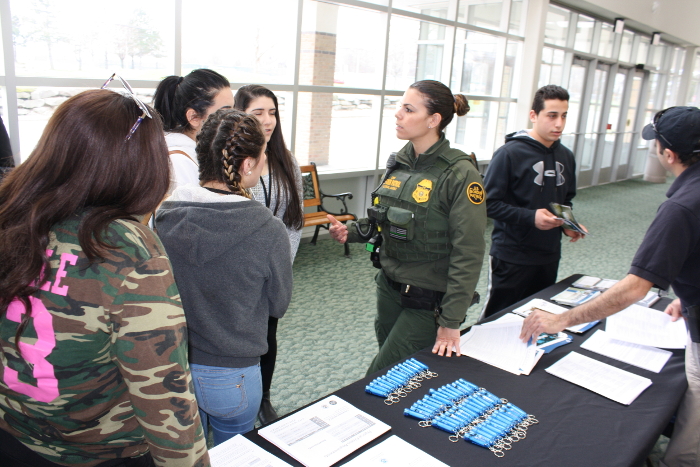 DETROIT – As Arab and Muslim Americans prepare to reciprocate Donald Trump’s harsh scrutiny following the fruition of promised policies, a group of federal law enforcement officers are working to bridge the gap between themselves and a community critical of government.
The Middle Eastern Law Enforcement Officers Association (MELOA) formed in April 2015 as a small circle of Department of Homeland Security (DHS) employees from Middle Eastern backgrounds. They initially gathered to casually engage in community service and create a space for like-minded individuals to meet.
Community engagement efforts already exist, including the establishment of BRIDGES, a forum designed to bolster communication and transparency among Arab American activist organizations and law enforcement, following 9/11.
The DHS continues to forge partnerships with Arab communities. Last January, Homeland Security Secretary Jeh Johnson visited Dearborn to unveil the “If You See Something, Say Something” campaign, under the controversial Countering Violent Extremism (CVE) program that promotes two-way cooperation to fight home-grown fanaticism.
However, a handful of DHS officials, Immigration and Customs Enforcement (ICE) and Customs and Border Protection (CBP) officers have taken a different approach to building community-law enforcement relationships.
Service-driven
Today, about 150 local, state and federal officers in Michigan are involved in charity, youth outreach and cultural awareness training events through MELOA.
The DHS-recognized non-profit has become a crucial resource for various enforcement agencies to learn better policing approaches among Arab Americans. Its members also visit schools to encourage students to consider careers in law enforcement.
MELOA hosted a few dozen officers from all levels of law enforcement for a day of cultural awareness at the Arab American National Museum in December. The program included implicit bias training and an understanding of recruitment tactics by terrorist groups.
It was a busy 2016 for MELOA members who volunteered their time as they hosted mentorship events at multiple local schools and churches; spoke with students at the Leaders Advancing and Helping Communities (LAHC) and held cyber safety and defensive tactic presentations at a HYPE Athletics summer camp. In May, MELOA awarded $1,000 each to two Arab high schools girls pursuing careers in criminal justice.
Community engagement and trust
MELOA President Steve Francis, the son of Iraqi Christian immigrants, was born in Beirut. He recalled how a local policeman’s powerful presence and devotion to community service enthralled him during a middle school visit.
Ever since, Francis knew he wanted to pursue a career in law enforcement.
He worked with the Michigan State Police and eventually sought more fitting opportunities in federal law enforcement.
Francis is now the deputy special agent in charge of security investigation at ICE in Detroit. He formed MELOA two years ago.
Francis knows of the hardships  immigrant communities face — a useful perspective when keeping safe a region with the most highly concentrated Arab American population, he said.
Although Arab and Muslim Americans are often critical of DHS programs, Francis said MELOA is comprised of members who are part of their communities and are sensitive to Arab Americans’ issues. Their jobs are to be their advocates, he added.
He also said that although MELOA is recognized by the DHS, it does not take administrative orders.
“We are really not there to develop sources,” Francis said. “If information comes in, it comes in; we never ask for it. Engaging the youth and establishing trustful relationships are a better way to counter extremism.”
For the people, by the people
Inspiring Middle Eastern youth to go into law enforcement is also one of the most effective ways to ensure fair and thoughtful policing in their communities, Francis said.
Dan Ghareeb, a MELOA board member and cyber security DHS special agent, is no stranger to law enforcement. His father was a Lebanese police officer. However, he did not initially approve of his son’s career choice.
Ghareeb said the fall of the Twin Towers on 9/11 made an impression on him. He felt aligned with a surge of Arab American activism. It was a call for him to join law enforcement to dispel stereotypes about his culture, while keeping the community safe.
Through MELOA, Ghareeb said public service officers like himself can sincerely lead a life of altruism. They have helped in soup kitchens; participated in turkey drives with the LAHC and Salvation Army and partnered with Zaman International for a clothing, toy and food drive.
“There is no amount of benefits or pay that makes a person want to do this job,” Ghareeb said. “You have to really want to give back to the community and live a life of service.”
Leann Lugashi, MELOA’s treasurer and an Israeli immigrant from New Jersey, said she pursued a career in law enforcement at 18-years-old.
However, she said being a local police officer was not easy when there would be only one woman in a 100-man station.
She passed required exams and physicals, yet the department would choose men for the job.
After six years of persistent efforts, she became a local police officer for two years.
Lugashi is now a border patrol officer— one of four women— and often speaks to young Arab American girls about the benefits of joining the force.
Lugashi pointed to the significance of diversity in law enforcement as reflected in her struggle, as well as within MELOA.
“The beautiful thing is that while there is a lot of negativity about Muslims and Arabs, we are a group that has Jews, Christians and Muslims working together,” she said.
Lugashi offered a piece of advice for girls interested in the career: remain resilient and involved in community service.
Echoing Francis’ sentiment, she added that more Middle Eastern law enforcement officers could help alleviate the suspicion of minority targeting.
Lugashi said the combination of an existing cultural awareness and a prevailing emphasis on education should serve them well in the field.
“Besides, Middle Eastern girls are tough.”