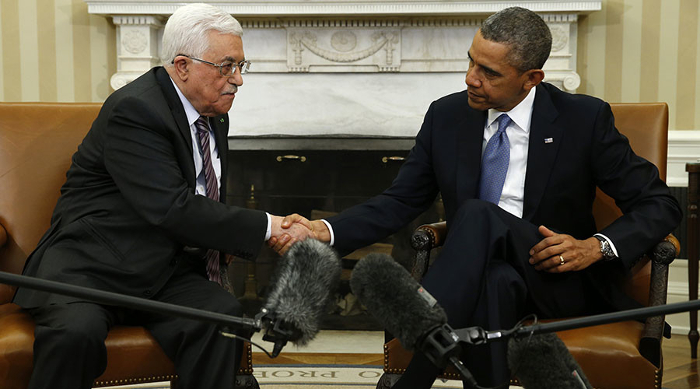 WASHINGTON — In his last hours in office, the Obama administration transferred $221 million to the Palestinian Authority that despite opposition from GOP members of Congress, officials say.
A State Department official and several congressional aides told the Associated Press that the outgoing administration and former Secretary of State John Kerry, formally notified Congress it would spend the money Friday morning, hours before Donald Trump took the oath of office.
In addition to the $221 million for the Palestinians, the Obama administration also told Congress on Friday it would proceed with the release of another $6 million in foreign affairs spending, including $4 million for climate change programs and $1.25 million for U.N. organizations. The aides and the State Department official weren’t authorized to speak publicly on the matter and demanded anonymity, noted AP.
The funds for the Palestinian Authority were originally approved by Congress in the fiscal years 2015 to 2016 and were aimed at supporting humanitarian aid efforts in the West Bank and Gaza, but GOP lawmakers put a hold on the funds. Rep. Ed Royce (R-California), the chairman of the House Foreign Affairs Committee, took issue with funding the PA, which he claimed funds terrorism.
In a July 2016 statement by Royce, he said the PA uses US aid money as a “martyrs’ fund” to pay “the families of Palestinian prisoners and suicide bombers.”
“It’s hard to see how this ‘pay to slay’ policy wouldn’t put them on the state sponsor of terrorism list,” Royce said.
In the past, presidents have respected holds placed on funds by Congress. However, they always had the power to overturn any holds after the funds were allocated. Obama, who was a strong supporter of the Palestinian Authority, had pressed Congress for years to release the funds.
The Obama administration had for some time been pressing for the release of the money for the Palestinian Authority, which comes from the U.S. Agency for International Development and is to be used for humanitarian aid in the West Bank and Gaza, to support political and security reforms as well as help prepare for good governance and the rule of law in a future Palestinian state, according to the notification sent to Congress.
The funding is likely to anger some lawmakers in Congress as well as the Trump White House. Trump has vowed to be a strong supporter of Israel and has invited Israeli Prime Minister Benjamin Netanyahu to visit Washington next month.
He has also pledged to move the U.S. Embassy in Israel from Tel Aviv to Jerusalem, although White House spokesman Sean Spicer said Monday a final decision on that had yet to be made. Despite speculation in Israel that an announcement of the move is imminent, Spicer said the decision-making process is only in its very early stages.
“If it was already a decision, then we wouldn’t be going through a process,” Spicer told reporters.