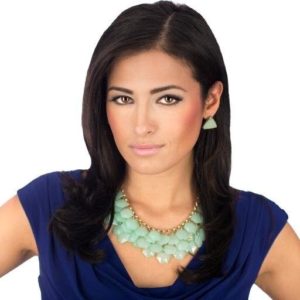 SOUTHFIELD – Born and raised in Detroit, Ameera David has returned to her hometown to work at WXYZ/WMYD as a 7 Action News anchor/reporter after hosting “Boom Bust,” RT America’s flagship financial news program, headquartered in Washington D.C.

The show airs daily and is broadcast to 700 million homes in over 100 countries.

David was a correspondent and newscaster for the overall news segment of the network before hosting the show.

As a producer/reporter for Arab America.com, she wrote about issues affecting Arab Americans in a weekly column. She also co-hosted “Arab Detroit” for Detroit Public Television.

“I’m thrilled to return to Detroit to report in the community I call home,” David said. “I grew up watching and admiring WXYZ, so I’m especially honored to join this news team, one that’s known for taking action on the stories that have helped to shape and redefine this great city.”

David attended Detroit Public Schools before moving to Northville when she was in high school.

She later received a bachelor of arts degree in political science from the University of Michigan -Ann Arbor and a master of science degree from the Columbia University Graduate School of Journalism in New York.

“With Ameera’s experiences and knowledge as a journalist and her familiarity of Detroit, she will have an immediate impact on our news team,” news director for WXYZ/WMYD Rhonda LaVelle said. “She has deep connections to this area, and she will be able to tell the important stories of the people in our community.”