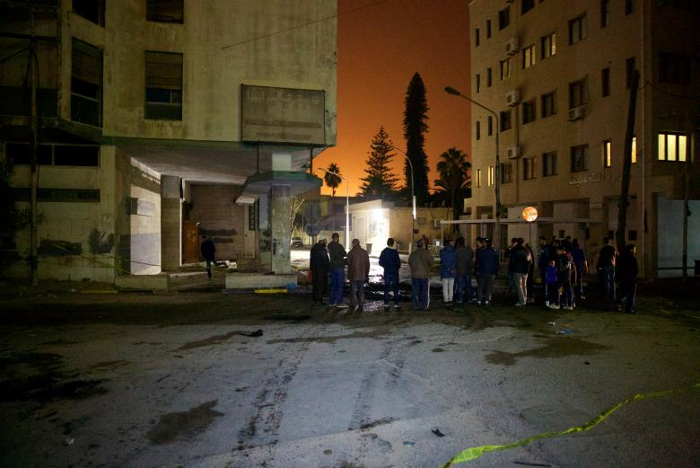 People gather at the scene where a car bomb exploded close to the Italian embassy in Tripoli. -Reuters

TRIPOLI ― A counter-terrorism unit in the Libyan capital Tripoli said it suspected a car bomb that went off on Saturday near the Italian embassy was planted by backers of a rival force in the divided country’s east.
The blast occurred in central Tripoli about 400 yards from the recently reopened embassy. The bodies of two men were recovered from the wreckage of the car.
“This terrorist act is a result of political conflict between east and west,” the city’s Special Deterrence Force (Rada) said in a statement late on Wednesday that signaled it held the Libyan National Army (LNA) responsible.
The dead men had been trying to target the embassy, but had been prevented from parking their car near the compound’s walls, Rada said.
Many doubt it has the capacity to do so, but the claim has led to speculation that it is trying to lay the ground for a military takeover.
It gave the names of the two suspects whose bodies had been found in the car, also naming a third suspect who it said was still at large.
Both Libya and Tripoli itself are home to myriad armed groups with shifting and conflicting loyalties that have sought to fill the power vacuum created when long-time leader Muammar Gaddafi was killed in 2011.