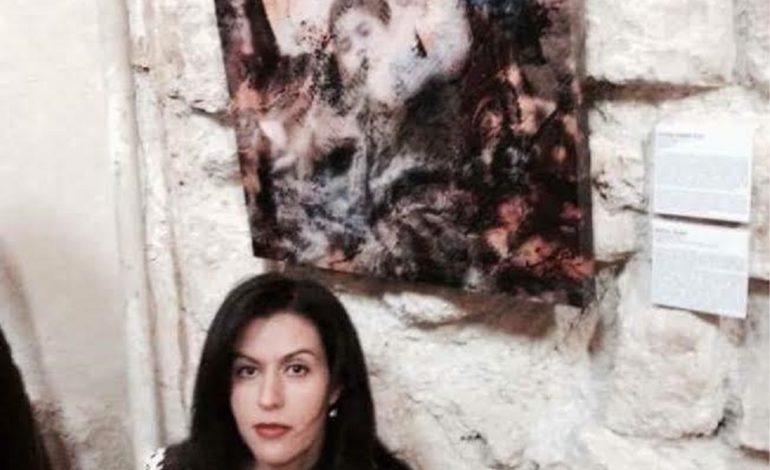 FAIRFAX, VA— Visual artist Manal Deeb uses her Palestinian heritage as a basis for her artwork— uncovering the many struggles of Palestinians while integrating Arabic calligraphy to show the influence culture and religion has on their lives.

“My artwork presents a twist to modern art through a combination of digital art and calligraphy,” Deeb told The AANews. “[It] not only portrays the barriers and endless struggles Palestinians experience on a daily basis… One can say that [it] echoes the voice of the people. It shakes the walls and the stiff shackles that society imposes on minorities and gender roles. My use of calligraphy allows me to incorporate culture, language and religion and their impact on society.”

Deeb found a passion for art back home in Ramallah, where she was born in 1968. Her talent progressed when she arrived in the U.S. in 1986.

Growing up, she would doodle a lot, but had no idea where her passion would lead her; art had not been as prevalent as other fields of study in the Arab world.

“I used to sketch and draw figures and characters on paper and walls,” she said. “Not until I traveled to the U.S., after finishing my high school in Palestine, that I started taking my art interest into the first steps of my lifetime journey. So, my passion for art has no starting point per se, but rather the passion has gone through different stages of transformation.”

Most of these stages occurred in the diaspora as she found herself distanced from her homeland. She felt the need to transform her loss to art, which brought her the feeling of home in its own way.

“My personal eagerness to transform my feelings to art strongly started when I traveled away from home and my parents,” she said. “At that time, [art] provided me the feeling of belonging and a sense of home being away from home.”

Deeb ended up studying studio arts at the University of Illinois in Chicago and received her bachelor’s degree in interdisciplinary studies with a concentration in psychology of art from George Mason University in Virginia.

Her interest in psychology stemmed from the relief art had given her, as she did not have to speak— her art spoke for her.

“For me, one aspect that doing art has clearly revealed is that I could say everything I want to say without a word,” she said. “This ability has provided me a way of expression which resulted in self-relief. [It] has attracted me to explore the psychological impact of art from an academic side.”

She added that although George Mason University does not offer a specific art therapy major, her advisor in the independent studies, a psychologist himself, worked with her to create a tailored psychology of art curriculum.

As a student of studio arts, Deeb had many small showings during her studies at the University of Illinois.

After graduating, Deeb’s artwork shone; she’d attained the confidence she once lacked— to officially present her work to the public. Even now, however, she admits it’s still a challenge.

“My main challenge was and has always been presenting my artwork publicly, since it reveals me from the inside,” she said. “…This is not easy to overcome and I continue to struggle throughout the process. Every artwork piece is so close to my heart and it is like my own baby.”

Deeb’s main goal when it comes to her paintings and digital art is to heal the traumas and depressions that many Palestinians suffer. She said most have searched for their identities and a sense of belonging away from home, and that she was one of them. For her, art provided the comfort she needed.

She added that her artwork has resonated with many Palestinians living in the diaspora.

“Art therapy is a very widely used technique for healing psychological issues throughout history,” she said, adding that art forms have helped her, as a Palestinian, to overcome part of her misery during and after the loss of land. “I am lucky for having art as a tool to create many positive impacts on me personally and on my art viewers. Palestinians living in diaspora have been touched by my artwork, which has revealed some of their own pains in abstract forms.”

While her use of Arabic calligraphy is based on religious and cultural texts— which she attractively places in her pieces as a source of empowerment that many Palestinians use to overcome war, oppression and tragedy— she said it also revives the celebration of life.

“For me, thought serves as the blossom of my artwork,” she said. “Passion is the seed and art is the fruit. The use of calligraphy— bark, earth and branches— not only celebrates Earth and my homeland’s beauty, but life itself.”

Deeb has her own studio at the Workhouse Arts Center in Lorton, Virginia, which is open to the public. She is the only Arab American visual artist represented in the center.

In only her first year, she was selected by art curators as one of the top artists at the center and as director’s pick for 2016.