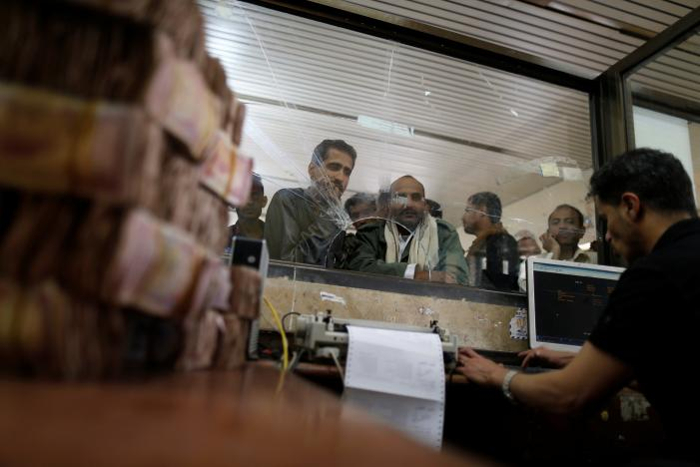 Public sector employees crowd at a post office to receive their salaries in Sanaa. -Reuters

SANAA ― Already suffering grievously under nearly two years of civil war, many thousands of Yemeni state workers now face destitution as their salaries have gone largely unpaid for months.
The immediate reason is a decision by the internationally-recognized government to shift Yemen’s central bank out of Sanaa, the capital city controlled by the armed Houthi movement with which it is at war.
Underlying the bank’s move to Aden, the southern port where the government is based, is a struggle for legitimacy between the two sides. The result is to deepen economic hardship when four-fifths of Yemen’s 28 million people already need some form of humanitarian aid, according to U.N. estimates.
“I sold everything I have to cover the rent and the price of the children’s school and food. I have nothing left to sell,” said Ashraf Abdullah, 38, a government employee in Sanaa.
“Salaries have become a playing card in the war, and no one cares about the fate of the people who die of starvation every day,” the father of two told Reuters.
At least 10,000 people have been killed in the fighting while millions face poverty and starvation. Saudi Arabia intervened in March 2015 to back President Abd Rabbu Mansour Hadi after the Houthis, who are aligned to Riyadh’s regional rival Iran, pushed him out of Sanaa.