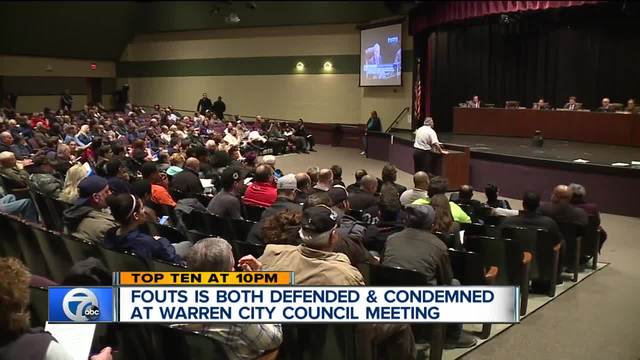 WARREN — On Tuesday, Warren City Council called for its battered mayor to inspect the recordings that appeared in the past month of him or someone else disparaging disabled people, older women and African Americans.

The plan passed 4-3 and asks the mayor to use state and local agencies to help him find the source and verify the recordings. The council said Fouts should resign if it’s confirmed to be his voice.

Fouts didn’t appear at Tuesday’s council meeting, but he has denied that it’s his voice in the recordings through multiple Facebook posts.

The council also voted 4-3 for the Miller Canfield law firm to take on a state investigation on behalf of the city involving Fouts’ fundraiser. The firm is hired to inspect whether Fouts used city resources to endorse a fundraiser that was held in coincidence with his State of the City Address in April 2016.

The Secretary of State said in a letter to Fouts that it was investigating a complaint filed by former state Rep. Leon Drolet that accused him for using the event to raise money to support an independent political action committee. The fundraiser was purportedly marketed in a water bill attachment.

The newest recordings were leaked by Motor City Muckraker earlier this month without revealing a source.

“What happened to the right of a person to confront their accuser?” Councilman Ronald Papandrea said. “Why is the person who made these tapes hiding?”

Many officials have called for Fouts to resign after audio tapes surfaced, but he did not comply.

He said the recordings were fabricated.

“There is tremendous effort to force me out immediately by slander, by character assassination, lies, and by out right condemnation of me,” he wrote on Facebook.