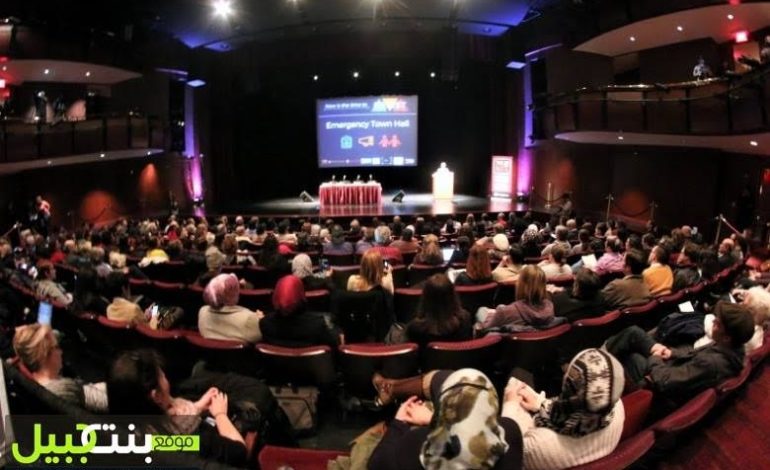 The event, originally scheduled for the Arab American National Museum, had to be moved to the Ford Community and Performing Arts Center to accommodate the unexpectedly large turnout.

More than 1,200 people attended the town hall to listen to organizers and lawyers deliver informed comments, offer legal advice and address concerns that both affected and confused citizens had regarding the administration’s new policies.

Take on Hate’s Asha Noor served as the moderator of the event’s discussion portion. Lawyers Noel Saleh of the Arab Civil Liberties Union of Michigan, Abed Ayoub, policy director of the American-Arab Anti Discrimination Committee and Khaled Beydoun, law professor at the University of Detroit Mercy School of Law, each gave overviews outlining their assessment of the climate after the executive orders were issued.

Ayoub began the panel debriefing the audience on the events and chaos that unfolded almost immediately after the travel ban was signed Friday, Jan. 27, at 4:30 p.m.

The ban, he reminded the audience, affected those from Iraq, Iran, Syria, Yemen, Somalia, Sudan and Libya.

“Individuals from those seven countries could not enter the U.S.,” he said, adding that “some green card holders were forced to sign abandonment forms.”

Ayoub additionally advised Lebanese audience members, some of whom came to the United States on a visa, to not return to their country of origin if they were concerned with the travel ban.

He warned that Lebanese nationals on a visa or green card may not be able to reenter.

Though Ayoub acknowledged claims that spread across social media and messaging platforms that additional countries would be added Wednesday, were rumors, he didn’t deny the possibility of an expansion to the ban.

However, in a Feb. 2 letter provided to Dearborn-based immigration lawyer Mohamed Elsharnoby, the Department of State stated that “there is no addendum, annex or amendment now being worked on to expand visa revocations or the travel ban to countries other than those currently implicated in the executive order.”

Elsharnoby, who shared the letter with The AANews, said frazzled and frantic Arab Americans should be relieved that said rumors are untrue.

“There are no current plans to do so, and there is nothing to worry about it,” he said.

The State Department confirmed to the American National Lawyers Association that these allegations were false.

Saleh brought a seasoned perspective to the panel discussion. Having served on the ACCESS board since 1989, he helped the ACLU coordinate legal work to Arab and Muslim communities post 9/11.

“We’ve won the first round, but we never won the battle,” he said.

Lawful permanent residents, Saleh said, were able to reenter thanks to the pushback caused by community activism in the airports on Sunday.

On the litigation end, Saleh was among those celebrating attorneys’ efforts and accomplishments during a tireless and thankless weekend.

“We filed four lawsuits in various parts of the country,” he said. “In every lawsuit we’ve been successful in obtaining a temporary restraining order requiring the government to…put on hold provisions contained in the terrorist entry memorandum.”

The importance of activism

With steadfast determination, Saleh commended the audience for “having won the first round”, but reminded them that “that’s not necessarily winning the battle.”

While his speech complemented Ayoub’s in theme, he differed slightly with him regarding of the importance of citizen protest and activism.

“The old way of doing things with activism and community engagement is not going to work,” Ayoub said. “There has to be a real strategy driven by real professionals. Anything otherwise is going to hamper our movement forward as we take these issues on.

“Litigation without activism will never be effective,” he added. “Activism — the pushback, the demonstrations— forced this administration to back off.”

For his part, Beydoun delivered a powerful oration that sought to empower and embolden the collective psyche bludgeoned by Trump’s executive order.

d Arab against one another.

“Support of counter-radicalization is support of the Muslim ban,” he stressed.

In the same vein, he urged a pluralistic call to action.

The proverbial battle, as the four panelists would agree, would involve a demonstration of solidarity, with African Americans, Latinos and LGBTQ groups joining the ranks of Muslims and Arabs similarly targeted and invested in the same struggle.

“One third of the Muslims in this country are Black,” Noor said. “You can’t come into this space and not say Black Lives Matter.”

Hassan Khalifeh contributed to this report.