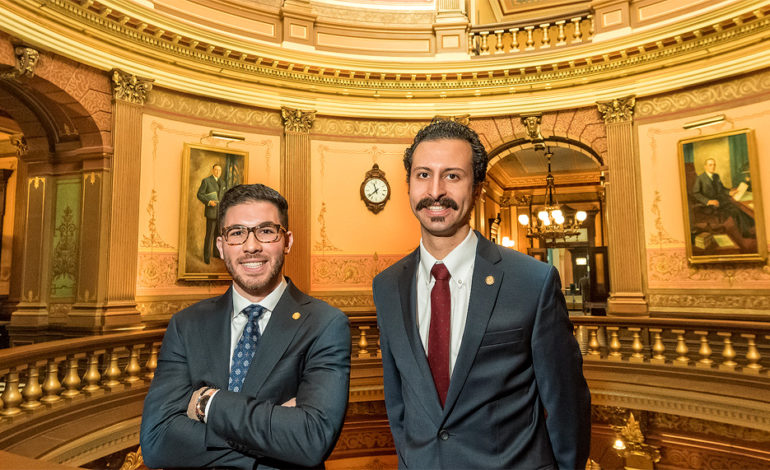 LANSING— In response to the growing tide of anti-immigrant, anti-Muslim legislation put forth by Donald Trump’s executive orders, Michigan legislators have pushed forth— as well as against— legislation pertaining to Trump’s immigration ban and assault on sanctuary cities.

Arab American lawmakers have been instrumental in orchestrating the push back against the bill banning travel and entry into the United States by refugees, immigrants, green card holders and nationals from seven Muslim-majority nations.

“A welcoming America is not incompatible with a strong and secure America,” he said.

Others, like U.S. Rep. Ralph Abraham (R-LA), have joined their partisan counterparts in support of Trump’s executive orders, including the travel ban.

Six Arab Americans are represented in the U.S. House of Representatives and five of them are Republicans. Of those Republicans, U.S. Rep. Justin Amash (R-Cascade Township), is the executive order’s most ardent opponent.

“It isn’t just that isolationism hurts the U.S. in every way imaginable — economically, geopolitically and culturally — but it damages the world, too,” Chang said. “Denying entry to those who need it, who are desperately fleeing turmoil in their countries and view America as their last hope, has consequences that can and will be far reaching.”

However, the efforts have not been shared among enough Michigan legislators. The State House, divided between Republicans and Democrats, with an overall slight Republican leaning, is not always able to work in favor of those pushing for resolutions or bills to support Michigan’s immigrant communities.

Rep. Yousef Rabhi admits the challenges place him in the center of gridlock. He said that at times he and his colleagues are “not able to go very far” in supporting measures to safeguard immigrants and refugees.

On Jan. 26, the 180th anniversary of Michigan’s statehood, HB 4105, known as the “Sanctuary Policy Prohibition Act”, was introduced to the Michigan House Floor by State Rep. Pamela Hornberger (R-Chesterfield Township). The act, penalizing sanctuary cities, prohibits local government from enforcing laws that limit cooperation with federal officials regarding immigrant status of individuals in the city.

The law targets municipalities that have taken measures to limit communication and obedience with federal government about immigration status of residents. “Sanctuary cities” take measures to protect residents that may be undocumented against potential deportation efforts by Immigration and Customs Enforcement (ICE) officials.

The bill is regarded as part of a larger campaign against immigrants and refugees materialized through Trump’s corollary of executive orders issued within his first week of assuming office.

This is not the first time a bill against sanctuary cities was introduced in Michigan. In September 2015, a similar bill, Senate bill 445, was introduced to push police to check immigration papers.

H.B 4105 is currently pending review by a House committee, according to Rep. Hammoud. He said his office is tracking the bill and that he strongly opposes its measures.

Only after a bill leaves the committee can it be discussed on the House floor.

“The best case scenario is that it’s never taken in committee,” Hammoud told The AANews, adding that he has been discussing his concerns with the chairman of the Local Government Committee.

“I talk about my worry, the negative impacts this [bill] would have, and give him information why this bill shouldn’t be taken into committee,” he said.

Hammoud and Rabhi both vouched for two other resolutions issued in response to the president’s executive orders.

Working closely with the ACLU, Hammoud introduced a resolution urging Congress and the Michigan Legislature to adopt compassionate and inclusive rather than discriminatory immigration policies for their municipalities.

Hammoud was one of many State House Democrats who co-signed that resolution. Rabhi co-signed both.

How residents can make an impact

Both representatives agree that the most critical factor to success in their efforts toward justice is the mobilization of their constituencies.

“I’ve been taking an activist role,” said Rabhi, who organized and rallied alongside constituents in Ann Arbor. “Most of my energy was spent out in the community, being with people against [Trump’s executive orders].”

The legislator and organizer stresses unity and collective resistance to be undertaken by all immigrants equally harmed by the president’s actions against immigration.

“[We] stand not only with Muslim brothers and sisters, but also with other immigrants. Trump’s divisiveness employed through his xenophobic rhetoric and executive orders are part of his many means to “distract people from incoming wealth inequality.”

Hammoud, also a ubiquitous grassroots community presence, said he believes a great deal of legislative power rests within the ability of fellow residents to organize and put pressure on Congressmen and committees for and against bills that affect their communities.

He urges residents to call the head of the House Government Operations Committee, State Rep. Lee Chatfield (R-Levering), to put pressure on supporting the two resolutions. Chatfield can be reached in his office on Tuesday, Wednesday and Thursday at 517-373-2629 to be urged to take up the issue.