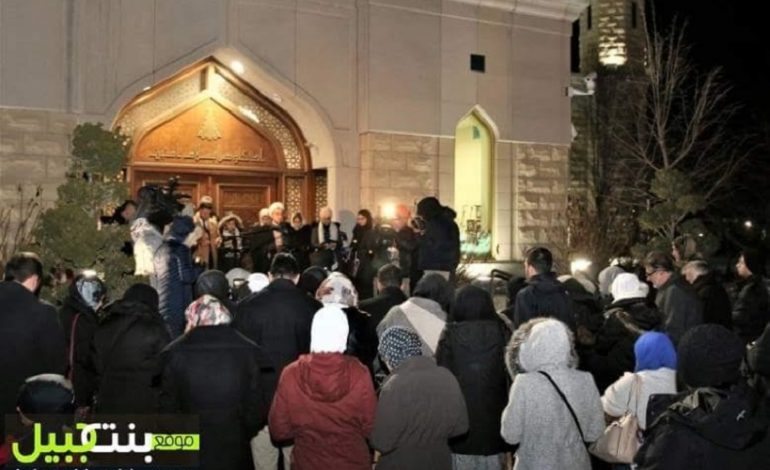 A small crowd gathered in the cold outside the ICA at 6:30 p.m. as dignitaries and community leaders spoke about the terror attack.

“This week six of our brothers walked into the Quebec Islamic Cultural Center seeking tranquility, guidance and peace, like many of us who walk into the Islamic Center of America,” activist Hassan Abdallah said. “These brothers saw their center as not only a place of worship, but a safe haven from the misfortunes that often occur within this world.”

The victims consisted of six murdered men, ranging in age from 39 to 60, and 19 wounded. Alexandre Bissonnette, a 27-year-old student, used a restricted firearm to shoot the worshippers during evening prayers.

He was charged with six counts of first-degree murder and five counts of attempted murder, according to Quebec’s Royal Canadian Mounted Police.

Abdallah said fellow Muslims died in a terrorist attack driven by the hateful rhetoric that has been targeting Islam.

“Please understand, brothers and sisters, that this attack is not only an attack on the Muslim community,” Abdallah said. “It is a show of the ripple of the waves of issues and attacks on all minorities, both religiously and culturally, who may be subject under the failing leadership of this president’s administration.”

“We celebrate together, we protest together,” he said. “Tonight, we mourn together.”

Woronchak said the community needs to put an end to the hate and to push back. He assured the community that elected officials stand in solidarity with them.

“We need to reach out and put our arms around our community and to keep these things from happening,” he said. “You need to know that your family of elected officials here in Dearborn and throughout Wayne County stand together with this community and will always continue to.”

Former State representative Rashida Tlaib spoke on behalf of Take on Hate. She said feeling such rejection and hatred has been hurtful.

She called hate a “dangerous disease” that stimulates these acts of violence.

“We all can really try to understand why,” she said. “But I think it’s really difficult and it’s going to bog us down… I want to fix this and I think we all want to fix this.”

She also suggested that if others got to know Muslims— and saw that they’re peaceful, loving and funny— like anyone else, it would help fix this.

She said standing up and pushing for the rights of other minorities is just as important because the “disease” is not attacking only one minority group.

She asked Muslims to “push any time you see the disease resonated”, no matter the differences between groups.

“Don’t you ever take that disease internally,” she said. “… As they stand with us, we need to stand with them when they are victims of this disease.”

He said these are important issues that the Muslim community needs to stand for, adding that it needs to be concerned for and work with other minority communities so that such crimes and mourning are not repeated.

“We really need to think and come together and plan,” he said. “So that we don’t need to come back here to commiserate or state our hearts are bleeding with this community or that community.”

At the end, the imam and the attendees recited Surah Alfatiha (the first chapter of the Quran) for the six Muslims and other victims killed in terrorist attacks around the world.