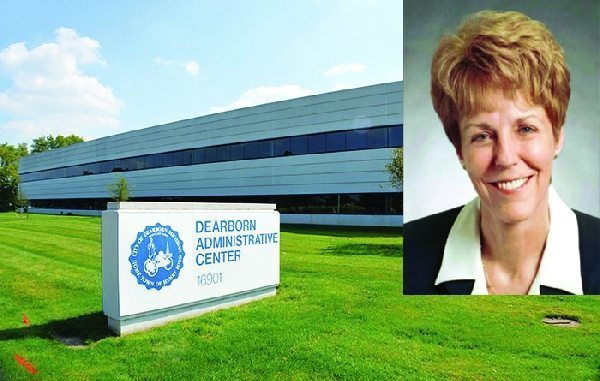 DEARBORN — Former City Clerk Kathleen Buda has been charged with seven counts of felonies including embezzlement, larceny in a building and misconduct while in office, according to information obtained by The AANews.

Buda will be arraigned tomorrow at 1 PM before Judge Mark Somers in the 19th District Court on the above mentioned charges.

Prosecutor Kym Worthy filed the charges today. Buda, now-retired, was taking money from a cash box at the City Clerk and used them to gamble and buy lottery tickets according to official police investigation documents obtained by The AANews.

Combined, charges of larceny in a building, and embezzlement and misconduct by a public officer, could land Buda up to 15 years in jail and be required to pay thousands in fines.

Documents obtained in Nov. 2016 by The AANews from the State Police show that city clerk employees become suspicious that Buda was repeatedly stealing large amounts of cash from birth, death and other certificate fees.

At City Hall, individuals pay at the cashier’s window for a variety of certificates. However, when it gets busy – like during tax season – the office accepts payments at the neighboring city clerk’s window to ease long lines.

During those times, workers carry the cash box they used to store the payments from the clerk’s window to the cashier’s window to make deposits throughout the day.

Three of Buda’s close coworkers told State Police last October that they’d begun noticing her often taking the cash box from the clerk’s window directly to her office, where nobody would see her.

She would return the box to the cashier’s office with only minimal change and checks.

Other times, employees would notice large sums had disappeared overnight from the cash box when Buda had late meetings.

The box was stored in a locked room. Coworkers would find just an envelope of small change in the box the next day.

According to the State Police, Buda told employees who asked about the money that she’d taken it “for safekeeping” and that she “didn’t trust it being locked in the vault.”

“Buda was religiously interested in the cash at work,” one worker told police investigators.

On Dec. 16, 2015, Michigan State Police investigators obtained a warrant and seized several boxes of documents and other property from Buda’s office, prior to announcing her retirement on about a month later. She citing the stress of upcoming elections, after having worked as the city clerk for 21 years.

At the time, she told The AANews she was approaching 65-years-old and that her retirement had nothing to do with the investigation.

A resolution was raised in an August 16 Council meeting to set aside and authorize $11,300 from the city’s budget to compensate Buda for sick and leave days.

“In light of what is going on…regarding embezzlement of taxpayer funds…until this investigation is completed, I do not see how we can authorize this,” Sareini said.

According to the Michigan Public Employee Retirement Benefits Forfeiture Act, if a public employee is convicted or enters a no contest plea in court, due to a felony or breached public trust during their service, their retirement benefits and other benefits should be forfeited.

All council members, including Mayor O’Reilly, concluded that Buda is entitled to the benefits, especially because the investigation is ongoing and there has been no proof of guilt.

A vote of 6-1 passed to compensate Buda.

City Attorney Walling said if Buda is charged and convicted for embezzlement of tax dollars, the city would seek to restore the funds.