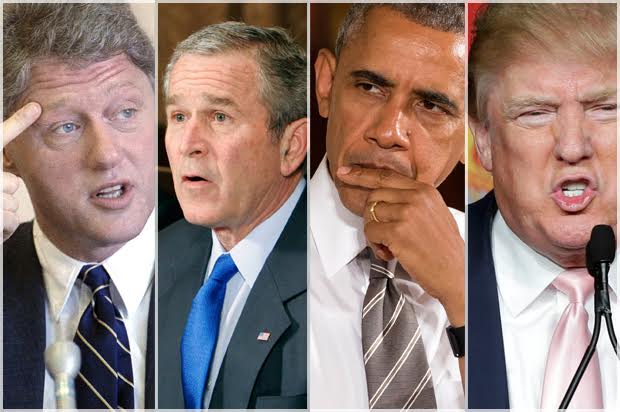 Donald Trump’s executive orders were no doubt an overt assault on the character and integrity of not only the Arab and Muslim community, but also of the rich framework of immigrants of diverse backgrounds and nationalities that construct the backbone of this nation.

Even before the Sept. 11th attacks, the 1996 ‘Secret Evidence law’ under the Clinton administration targeted ‘suspected’ Muslims, threatening suspects with jail time or even deportation, proving Islamophobia and anti-Arab sentiment a more bipartisan and older campaign than is commonly believed.

Former President George W. Bush was hailed, in recent years, for his orations against Islamophobia he took on during his presidency. A year after 9/11, in 2002, Bush said that “no one should be unfairly judged by appearance or ethnic background or religious faith.”

In recent memory, his statements have resurfaced during the campaign for the 2016 Republican primaries when, compared with the rhetoric of Trump, Carson, Cruz, and Rubio, Bush’s statements were evaluated as relatively tolerant, compassionate, and progressive in retrospect.

“I also want to speak tonight directly to Muslims around the world,” Bush famously reassured Muslims in the wake of the 9/11 attacks. “We respect your faith.”

Complimentary to Bush’s rhetoric, it was the media, too, that ushered in a star spangled banner adjacent to portrayals of terrorizing Muslim militants. The media shedding crocodile tears in light of discrimination against Muslims today is the same media that invoked fear into the hearts of Americans against Muslims by dehumanizing and demonizing them years prior.

These displays of verbal and visual rhetoric garnered support for the war in Iraq—absent of any evidence of weapons of mass destruction or involvement in 9/11 and Afghanistan—that resulted in the deaths of 26,000 Afghan civilians and around 1.5 million Iraqis, including at least 500,000 Iraqi children.

The world view that colored and shaped the Bush administration foreign policy, reminiscent of Samuel Huntington’s 1990 Clash of Civilizations–despite Bush’s assurances that there is “no clash of civilizations”–rested on the premise that the Western world was engaged in a critical battle with a fundamentally incompatible and inherently barbaric other, a collective and ill-conceived enemy that resided within a context, culture and faith that could be waged war against.

“Ours is a war against individuals who absolutely hate what America stands for,” Bush had said in a separate speech in 2002.

The vibrant dichotomic and often sanctimonious imagery that his words, time and time again, evoked draws its dramatic discourse from the very media that served as a prominent architect of public opinion against Arabs and Muslims.

The entertainment industry has reflected American hegemony through its overwhelmingly negative and villainous portrayals of Muslims and Islam for decades. Jack Shaheen’s Reel Bad Arabs identified 936 depictions of Muslims and Arabs in media as negative out of an analysis of nearly 1,000 films.

The countries that he dropped the bombs on include Yemen, Iraq, Syria, Somalia, and Libya-countries that would be included in Trump’s travel ban.

From Bush’s wars to Trump’s executive orders, both of which can only be justified through the devaluation of Muslim and Arab lives, Islamophobia too has secured a place under Obama as it ensured a smooth transition across three administrations.

However, Obama was less vocal in confronting Islamophobia than even Bush, more concerned with dodging allegations that he was Muslim as if Islam were an indictment. Obama has, out of obligation, responded to a discriminatory climate through occasional speeches denouncing Islamophobia.

Yet Obama, too, unwillingly helped catalyze Islamophobic sentiments that Trump aggrandizes today. Rather than confront Islamophobia, he cowered beneath it repeatedly in his administration. In 2010 for example, Obama reportedly cancelled plans to visit Amristar’s Golden Temple out of fears that donning a turban would fuel allegations of him being a Muslim. His attempts at outreach to the Muslim community were sparse, with mosque visits paling in comparison to Bush, as Obama did not visit one mosque until the last year of his second term.

Given the United States’s history, it is crucial to evaluate Trump not as an erroneous anomaly, but an exaggeration of an existing order that has rested upon campaigns against Arabs and Muslims.

Nonetheless, the GOP remains the reputed crux of Islamophobia. Yet Islamophobia is a bipartisan problem that warrants impartial critique.