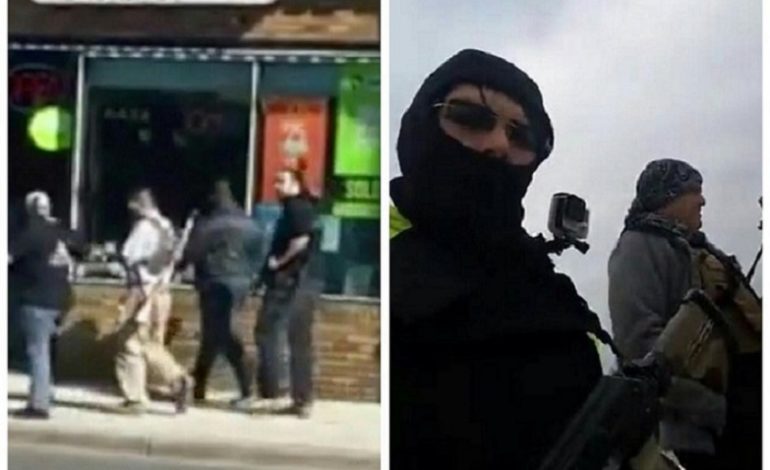 DEARBORN — On Sunday, February 19, a group of five armed individuals were spotted marching along Warren Avenue on Dearborn’s east side.
The open carry advocates walked down Schaefer towards Warren during peak business hours that morning.
A video taken by a Dearborn resident who witnessed the protest accrued thousands of likes on the “The Arab American News” Facebook page, generating a host of discussion by residents over the implications of the protest.
The incident, while generating a lot of interest and discussion from the community, additionally brought a great deal of outrage and fear.
“I, for one, don’t think for a group of relatively strange people to come into a city and get really armed up and walk down the street is a projection of Second Amendment rights,” Police Chief Ron Haddad said in a press conference on Thursday. “But rather it’s an intrusion upon the safety of the community.”
The sighting followed an incident two weeks ago in which two armed men— one from Leonard and one from Jackson— walked into the Dearborn Police Department to insist upon their right to carry arms and to express their vehement discontent with having been pulled over earlier in the day. The men, dressed in tactical vests and masks, live streamed both events. Both the incident at the police department and the demonstration attempted to broadcast support for an anti-gun control, pro-open carry stance.
Why east Dearborn?
As with the men at the police department, the five protesters who marched on Dearborn’s east Feb. 19 were from outside Dearborn. According to Haddad, they were marching, “supposedly, in support of the gentlemen in the lobby.”
While there was no direct connection between the two groups of outsiders, both incidents were interpreted as acts of intimidation and hostility against Dearborn’s Arab and Muslim constituency—a denomination most heavily concentrated on Dearborn’s East side.
Majed A. Moughni, a local attorney who manages a Facebook page where a similar video appeared, saw the action as nothing short of provocation in “a predominantly peaceful neighborhood.”
“Their rights to free speech end when my right to live in peace and harmony becomes intimidation and violence,” Moughni, an attorney, told The Arab American News.
Other residents and commentators, exasperated with the repeated gestures and attacks against the community, voiced similar discontent with what was largely viewed as an act of intimidation derived from anti-Arab and anti-Muslim sentiment.
“My overall problem with this is they could have gone to any other city in Michigan, or bordering city in Dearborn, but they chose to come here for a reason,” said a Dearborn resident named Alana, 22. “They wanted to come here and scare us because of who we are.”
The safety conundrum
The protesters’ stated intent of marching in support of open carry laws was regarded, likewise, as nothing more than a pretext that failed at underscoring the more overt campaign against Arabs and Muslims in their own neighborhoods.
“With all of the fake news generated about Dearborn as an ISIS stronghold, about its Muslim and Arabs in east Dearborn pushing for sharia law, coupled with the onset of mass shooters in America and the rise of hate crimes, they make me paranoid,” Yasmine, 25, another Dearborn resident, said of the armed demonstrators.
She also expressed genuine concerns over the safety and wellbeing of Dearborn residents.
“These people with guns, we don’t know if they’re unstable, looking for a fight, if they might co-opt Zimmerman heroics,” she added, referring to George Zimmerman, the Florida neighborhood watchman who shot 17-year-old Trayvon Martin, who was visiting another resident with his father, in 2012.
Zimmerman, who was later acquitted, shot the unarmed Martin under “stand your-ground” laws that allowed him an exemption of guilt, permitting force under a “direct or perceived threat.”
“Guns aren’t scary,” Yasmine said. “But the people who are carrying them might be.”
Many residents and community members agreed that better avenues exist for protesting in support of open carry laws and that the protesters’ support for the armed men who walked into the Dearborn Police Department were deplorable for reasons outside of their alleged support for Second Amendment rights.
“If it is for demonstration, [it] should be in controlled circumstances,” Haddad said. “Anything that solicits a response… is not an open carry situation.
“It’s important to know that we have permit free zones where we have had multiple people come in and demonstrate open carry,” he added, pointing out that an “intrusion upon the safety of the community” is not a protected Second Amendment right.
Moughni also recognized the limitations of legality in an exercise of free speech.
“A lot of things that are legal could cross the line,” he said, drawing an analogy to falsely shouting “fire” in a crowded movie theater.
In a 1919 case, “Schenck v. United States”, U.S. Supreme Court Justice Oliver Wendell Holmes Jr. used that analogy to point out that while the First Amendment protects free speech, it is not an absolute right— a point that rings no less true or relevant in hindsight.
During the press conference, Haddad also played a recording left on the American Moslem Society’s voicemail on Feb. 19.
“All Muslims are agents of Satan,” the voice on the recording said. “And they are going to be eradicated.”
The message also referenced Donald Trump, threatening the residents of faith that “everything is going to change.”
Haddad reiterated that Dearborn Police are taking measures to keep the community safe, also expressing his intentions to meet with Michigan lawmakers to review open carry legislation.
“I will be asking our state legislatures to review the open carry laws in our state to see if they can amend that law and also try to have some meaningful discussion with the government at the appropriate time,” he said.
By Julia Kassem