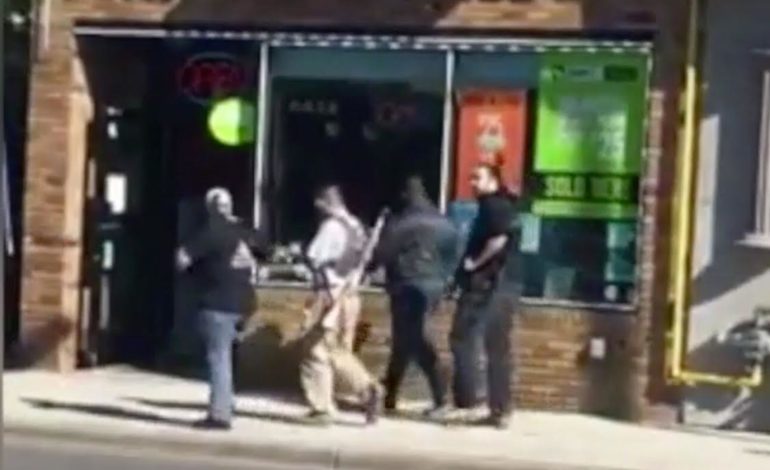 The incident occurred less than three weeks after two armed fanatics, from communities nowhere near Dearborn, walked into the Dearborn Police Department, claiming that they’d been harassed by a police officer on a routine stop and that they were coming to file a complaint at the station.
The men, who wore masks and tactical vests and carried rifles, live streamed the entire episode.
Just as Michigan Open Carry, Inc., one of the Michigan’s largest open carry groups, clearly denounced the actions of these individuals, The Arab American News denounces their disingenuous demonstration. These men were not engaging in a demonstration for open carry, or Second Amendment rights in general; they were engaged in a malicious action against our peaceful and united communities of faith.
Previous open carry demonstrations in Dearborn were met with tolerance, even as explicit Islamophobia was expressed— such as in October 2015, when about a dozen people, including four armed men, protested outside of the Centennial Library against what they called the “invasion of Muslim colonization” in America.
The recent events, in light of the community’s previous experience with such rallies, show that the reactions to Sunday’s demonstrations were not out of fear, but a natural response to an uncalled for spectacle. Yet the provocation did not work, as the community remained steadfast and unshaken.
While we recognize the Second Amendment, we believe that the acts of these individuals— both at the police station and on the streets of east Dearborn — is anything but Constitutional. It cannot be more obvious that they were arming themselves not against the threat that the government would revoke their Second Amendment rights, but rather reinforcing the nonexistent threat that Arabs and Muslims pose in the imagination of hardliners.
It is in defense of, rather than in critique of, the Bill of Rights—the first 10 Amendments outlined in the Constitution— that we denounce the derogatory and violent acts of these individuals.
There would be no other reason for outsiders to harass and intimidate a peaceful and quiet Arab and Muslim quarter of a city that these individuals have clearly never lived in or inhabited if there was not an ulterior motive underscored by discrimination and xenophobia.
The Arab and Muslim communities of Dearborn, unfortunately, have learned the hard way that this event is not far removed from the systematic hatred and vitriol that has too often targeted them— especially of late.
The American Moslem Society, a mosque situated in one of the safest areas of Dearborn, recently received a non-direct threat to its voicemail that disparaged the Prophet, referenced President Trump and called for the elimination of Muslims.
In an unrelated incident, a voice message circulating on social media is falsely claiming Police Chief Ron Haddad reportedly told an unknown individual that a group of Muslim women in traditional garb is soliciting money and entering homes as a beachhead for a group of thieves who will follow and rob the home. Haddad denied that he ever talked to anyone about such an incident, describing the whole episode as a hoax and fake news intended to distort the image of Muslims and the city.
In all these cases, a combination of fear, intimidation and tension is attempting to threaten the unity and integrity of a community that is renowned for its diversity, loyalty, tolerance and inclusion. These incidents, fact and farce, expose the imminency of perceived threat disproportionately and unfairly imposed upon the Arab and Muslim communities.
Arab and Muslim Americans refuse to let threats and false narratives define their communities. The Amendments that we as Americans respect and abide by, including freedom of speech and assembly, as well as the right to bear arms, are codified to protect individual rights and safeguard the individual against persecution; not to threaten and intimidate them.
The right to bear arms is not an infringement upon the freedom of religion and the right to live in peace, liberty and the pursuit of happiness. While the Second Amendment gives Americans the right to bear arms, they should do so responsibly, not recklessly intimidating their fellow citizens and infringing on their rights.