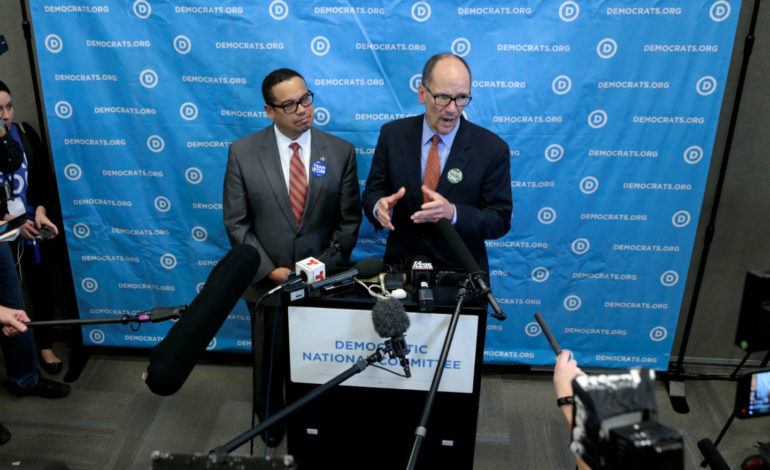 The first Muslim elected to Congress, Ellison received overwhelming support from the progressive wing that had steadfastly backed Sanders in his bid for the Democratic Party’s nomination for president.

Perez’s 235-200 win on Saturday marked the first by a candidate not presupposed to assume the seat prior to the election in more than 30 years.

Perez, whose first action was to call for Ellison to be named deputy chair— and who solemnly swears to be “Trump’s worst nightmare”— is otherwise regarded by Sanders progressives as the extension of an Obama-Clinton establishment Democratic order, where progressive policies will continue to be sullied by corporate and special interests. These unassured leftists continue to be cast as disingenuous yielders to lobbies in the eyes of Sanders supporters who backed him in the presidential election and who supported Ellison’s run for DNC chair on a platform of disparaging money influence in politics and touting campaign finance reform.

The fact that Ellison has won more than five terms worth of credibility among progressives through opposition to the Iraq War; his support of opening up diplomatic relationships with Iran and his advocacy for universal health care and pro-choice policies, to say nothing of his high popularity, may be why Perez called for his immediate appointment as deputy chair.

The good news is that Perez is better than what preceded and that Ellison was appointed deputy – both a sign of progress and a response to growing activism within the ranks.

The bad news is that the Obama-Clinton establishment that has been destroying the party is still catering to the big funders.

“The good news is that Perez is better than what preceded and that Ellison was appointed deputy,” wrote renowned intellectual Noam Chomsky in an email that recognized the appointment as “both a sign of progress and a response to growing activism within the ranks.”

Ellison’s new position in light of his ostracization illustrates the policy standoff between establishment and fiercely progressive Democrats. The fact that “a divided party can’t win” is a truth interpreted by centrist Democrats to perhaps be more open to a neo-liberalist orientation for the sake of “party unity” and political prestige can be reclaimed and re appropriated by those seeking to implicate the platform that struggles to quell its constituency’s growing discontent with the almighty dollar.

In an uncanny reprisal of the undertones behind Sanders’ run for president, Ellison was met with a plethora of public slander that revolved not around policy, but rather his alleged position on the Palestinian-Israeli conflict. Following a 2007 trip to Israel, Ellison’s opined on the situation in Gaza on the opposite end of the border, garnering accusations of anti-Semitism and placing him under the scrutiny of Washington and the mainstream media. In a 2010 speech, Ellison’s expressed criticism over the scope of the U.S.’s unconditional commitment to Israel, questioning why a “country of 7 million” directs the foreign policy of the U.S. in the Middle East.

If party donors and intransigent Zionism remain two incapacitating facets on their own merits, then the ugly combination of the two manifested itself in the results of the outcome of Saturday’s results. Haim Saban, a Zionist Israeli-American Clinton bankroller, managed to once again be an agent of both.

“The bad news is that the Obama-Clinton establishment that has been destroying the party is still catering to the big funders (including the fanatically pro-Israel Saban) rather than to their own ranks and the possibilities now open to create genuine programs to meet the needs and concerns of working people, displacing the Trump-style fraud,” Chomsky added.

Saban, having targeted both Ellison and Sanders for being anti-Israel (with Ellison, as usual, receiving the dual charge of being allegedly “anti-Semitic” as well) has put his money where his mouth is in posing himself as one of the party’s largest donors. Having donated $8 million to Clinton’s campaign, Saban rehashed the allegations of Ellison’s anti-Semitism weeks after the congressman launched his campaign for DNC chair and just weeks before Perez announced his bid.

In a last minute scramble to salvage the momentum that apparently collapsed twice as quickly as it had been built up, Ellison told CNN’s Chris Cuomo during last Wednesday’s DNC chair debate, that, contrary to the statements, he was willing to maintain the “bipartisan consensus of U.S. support for Israel” should he be accepted into the position.

These outcomes must be examined as representative of the growing divide between the increasingly averse attitudes among Democrats towards Israel as a foreign policy hegemony and establishment Democrats locked into its unconditional support. If we are to assess the Ellison/Perez contest— in its reprisal of the Sanders/Clinton debacle— as a parable of an unassailable rift among two orientations of the same party, perhaps we can give its rising voice more than just a proverbial seat under its chair.