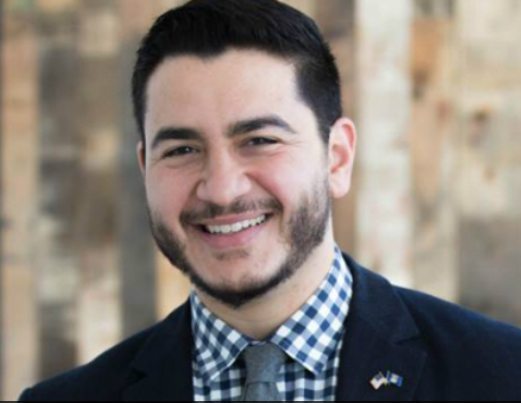 DETROIT— On Saturday, February 25, Former Detroit Public Health Director Abdul El-Sayed officially announced his candidacy for governor. He made his announcement under Eastern Market Shed No. 2 before supporters, a broad and diverse congregation that included family and friends.

El-Sayed, a Democrat, thanked family members and friends for their support.

“This marketplace is where people come together,” he said, drawing parallels between the multitude of items in the market and the diverse constituency of the municipality that, ultimately, coalesces to honor a common purpose. “Michiganders are here selling food from all over the state. They’re standing side-by-side as businesspeople, craftspeople, owners of small businesses. But more importantly, they stand together here as citizens.”

The metaphor even served as an allegory to El-Sayed’s own history as the son of two Egyptian American immigrants.

Raised by his father and step-mother, “Jackie”, in Metro Detroit, El-Sayed described coming from a lineage that includes nurses, a factory foreman and an engineering professor.

“They share a common future that brings them together,” he said regarding his family’s diversity. “And as Michiganders, so do we.”

If elected, El-Sayed could be the first Muslim governor in American history.

His Islamic values fall in line with his pluralistic and all-inclusive visions for his state as a public servant.

When Detroit was forced to close the 180-year-old health department in the throes of its emergency management crisis in 2012, Mayor Mike Duggan appointed the then 30-year old El-Sayed as health director for the city, making him the youngest health director in a major U.S. city.

Not only did El-Sayed face what he described as “one of the hardest challenges in municipal public health”, but he also expounded upon his duties as a tireless servant to the children of Michigan’s most disenfranchised cities.

He was able to institute a procedure to test lead contamination in Flint’s public schools and was successful in working to provide free eyeglasses for children in Detroit’s schools. In all his endeavors, El-Sayed spearheaded numerous initiatives to break down barriers and fight against austerity policies from an administration that constantly placed profits over people.