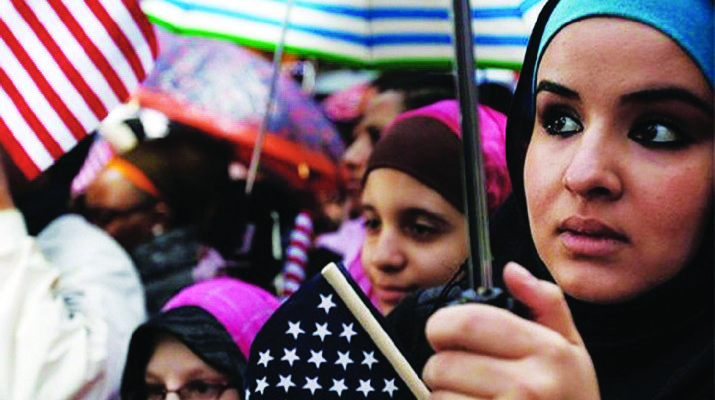 I  had recently been asked to give a talk about “being an American Muslim in the United States.” Although wary of the uses and abuses of the term, I obliged.

Islam is a religion propelled by values, not race. Nor, theoretically, by blind tribal allegiances, I explained.

The “American Muslim” identity which has been under constant investigation in U.S. media, politics and society is completely different from what American Muslims associate themselves with.

The media’s “American Muslim” is a suspect, a fifth column, potentially dangerous and more receptive to violence than every other collective identity in the U.S.. While this contrasts sharply with real Islam, facts hardly matter in the age of American nationalism, predicated on cultural and religious identification and “alternative facts.”

Caught within this brutal, baseless logic, some American Muslims no longer define themselves around their own political priorities, nor do they mobilize themselves alongside their natural allies – those who come from historically oppressed communities. Instead, they have taken to apologizing for their “Muslim-ness”, rather than demand an apology, justice and equality.

Many Muslims find themselves, as a collective, being forced to demonstrate their humanity, defend their religion and distance themselves from every act of violence, even if only allegedly committed by a Muslim anywhere in the world.

Long before the Trump administration’s “Muslim Ban” — banning citizens of seven Muslim-majority countries from entering the U.S. for 90 days — Muslims in the U.S. have always, to varied degrees, been embattled, collectively demonized, racially profiled by government agencies and targeted in numerous hate-crimes by fellow Americans.

In reality, hatred of Muslims goes back even before 9/11 and the U.S. war in Iraq in 1990-91 – a hatred based solely on media fear-mongering and Hollywood stereotyping.

There is also an odd “discovery” by various liberal groups that American Muslims are mistreated in their own country.

In truth, the cause of the “defenseless Muslim” is used as a political tool, with Democrats and others attempting to undermine the actions of their Republican rivals.

The administrations of Democratic presidents Barack Obama and Bill Clinton both had horrific legacies of violence and discrimination against Muslim countries.

In a landmark study released in March 2015, the Washington-based Physicians for Social Responsibly showed that the U.S. self-styled “war on terror” had killed anywhere between 1.3 million to 2 million Muslims in the first 10 years since the September 11 attacks.

Award-winning investigative journalist Nafeez Ahmed concluded that at least 4 million Muslims have been killed by the U.S. since 1990.

This excludes killings that have taken place in the last two years, or the countless civilians who perished during the U.S.-led sanctions on Iraq, starting in 1991, which were enforced throughout the Clinton administration.

Yet, all this is meant to be ignored and seen merely as the issue of an obnoxious president and that the pinnacle of the American violence against Muslims can be reduced to a 90-day travel ban on selected countries.

Subscribing to this mischaracterization reflects both ignorance and complete disregard for the millions of innocent lives that have been lost, in order for the U.S. to preserve its vastly dwindling empire.

At the Democratic Party National Convention (DNC) last July, former President Bill Clinton took the stage to articulate a retort to the Republican Party convention’s hate-fest of Muslims, Blacks, Latinos and everyone else who did not subscribe to their skewed view of the world.

But Clinton’s words were a mere liberal spin on the same chauvinistic, racist and exclusionist culture that often drives the political discourse of the Right.

“If you’re a Muslim and you love America and freedom and you hate terror, stay here and help us win and make a future together; we want you,” Clinton said before a large audience, which roared in applause.

For Muslims, feeling that their inclusion, citizenship and humanity are conditioned by a set of condescending rules, articulated by a White, Christian elite, is utterly dehumanizing.

What Clinton has wished to forget is that an estimated third of the slaves who built his country were, in fact, Muslims— shackled and dragged against their will to assemble the United States, field by field and brick by brick. It is the slaves that mainly brought Islam to America, and it is Islam that armed them with the virtue of patience and strength of character in order to survive one of the most ghastly genocides in human history.

Precisely for this reason, the identity of the American Muslim is, at its heart, a political one, concerned with human rights, justice and equality, with Black Muslims playing a tremendous role in confronting, challenging and clashing with the ruling White elitist order that controlled the U.S. from the beginning.

It is the Martin Luther King Jr.-Malcolm X-type movements – backed by millions of Black people throughout the country – that helped define the modern character of the Black American. They led the civil rights movement, exacting basic human rights at a heavy price and against terrible odds.

It is important that American Muslim youth understand this well, and that their fight for equality and human rights in their country is not a manifestation of some Democratic Party political game.

Those aspiring to be the “good Muslim”, the Uncle Tom, the “not-all- Muslims- are- terrorists” type, can only hope for a second-class status. But those who aspire for true equality and justice ought to remember the words of American revolutionary Assata Shakur: “Nobody in the world, nobody in history, has ever gotten their freedom by appealing to the moral sense of people who were oppressing them.”

The oppressors constantly try to redefine the nature of the struggle of those whom they oppress. For Bill Clinton, the issue is solely Islamic terrorism, never the terror inflicted upon Muslim nations by his and other administrations through a series of unjust wars and sanctions, killing millions.

The colonizer, oppressor, invader is always blind to his crimes. He sees only the violent reaction – however minuscule – of the people whom he subjugates.

According to the New America Foundation, alleged “Jihadists” killed 94 people in the U.S. from 2005-2015, during which time the U.S. killed nearly 2 million Muslims in their own countries.

Yet, the government’s media-driven, fear-mongering, anti-Muslim and anti-Islam discourse (for which both liberals and conservatives are equally responsible) has made terrorism the leading fear among Americans, according to a major national survey in 2016.

In his book, “Wretched of the Earth”, one of the 20th century’s most powerful revolutionary voices, Frantz Fanon, wrote, “Each generation must discover its mission, fulfill it or betray it, in relative opacity.”

For this generation of American Muslims, this is their moment — to discover and fulfill their mission and to define and assert who they are as the descendants of slaves, immigrants and refugees – the three main building blocks of America.