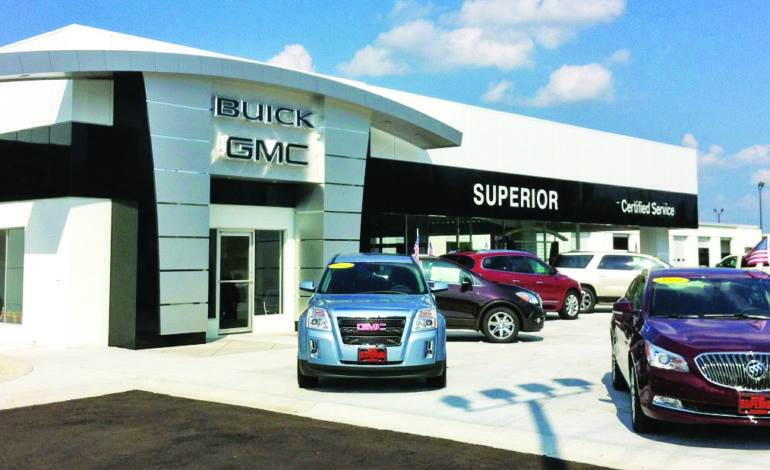 DEARBORN — Selling cars in Detroit is a paradox – it’s not easy keeping up with demand in the Motor City’s highly competitive market.
Planted in the heart of the automotive industry’s birthplace, one dealership among a cluster established decades ago has ranked among the region’s highest in sales and service, standing victorious in a race to rake in the numbers amid economic and technological transformations.

Superior Buick GMC, located on Michigan Ave. between Schaefer and Greenfield, has been a Dearborn mainstay for more than three decades, but its current owners— Bas and Tanya Robin— have done the most to help it live up to its name.
The couple bought the dealership in January 2015, and last year, Superior sold more GMC and Buick vehicles than any other dealership in the nine-state north central region.
Tanya Robin said they hadn’t expected their sales success; it came after a year-long effort to improve technical servicing methods and increase inventory. Superior now has more than 500 cars for sale.

By contrast, under the original 35-year ownership of local entrepreneur Walter Schwartz, Superior did not sell enough to rank among the top 75 in the nation.

Robin said that has been the story for most of Metro Detroit’s non-Ford Motor Company dealerships, because Ford has historically had the advantage in local sales.
“Predominantly, the people of Dearborn have been quite loyal to the Ford brand,” she said.

Despite Ford’s “home field advantage”, Superior won the 2016 GMC Dealership of the Year award due to the efforts of its sales team, whose members ranked first, second, third and seventh in the north central U.S.

Superior also received the 2016 Business Persons of the Year award from the Chaldean Chamber of Commerce. Dealer of the year award for Superior Buick GMC

Instilling a family-oriented attitude and attention to detail in addressing customers’ requirements are the secrets to beating the odds. – Tanya Robin, Co-owner

“It’s about humanity,” she said, adding that community service and has always been fundamental to the business.

Superior regularly contributes to charitable organizations and other causes.

Bas Robin, Tanya’s husband, was a refugee born in northern Iraq. One of 12 children, he said his parents migrated to the U.S. in the early 1980s and that he learned to work extra jobs to help pay the bills.

“It turned into helping other people’s children, who do not have the means,” he said. At about the same time the Robins acquired the dealership, Pamela Abbo began her sales career there. Last year, she set a record selling about 700 vehicles— the second highest number of GMs bought from a dealer in the region.

Bas Robin’s parents came to the U.S. from Iraq in the early 80s as refugees. One of 12 children, he learned to work extra jobs to help pay the bills.

Abbo said she’s set to surpass that amount this year, adding that aside from the up to 70-hour work week that led to the “gratifying” achievement, treating customers like family and with sincerity are what keeps shoppers coming back and referring friends to her.

She added that while competition is the rule of the game in the industry, it’s not a word they like to use at the office.

Today, most car shoppers know the basics of what they want and are fighting to beat deals, Abbo said. However, it is her job to understand their needs and talk them down from tricky ads.

He said trust, getting to know a customer well and providing viable packages and payment options are the reasons he sells most of his cars to local community members.

Bazzi also pointed to an improved economic climate and credit score ratings as a reason for the hike in auto sales.

Salesman Tony Jaber, who sold the seventh most GM vehicles in the region last year, said consumers have also learned to adapt to market and technology changes. The dealership’s challenge, then, is to know what features fit the buyer best and to be the first to offer the latest models.

That’s why car manufacturers are in constant communication with dealerships.

According to Tanya Robin, as consumers’ wants and tastes develop over time, manufacturers like GMC meet monthly with local dealerships and hold annual national meetings to maintain relevance.

“We know what the consumers want because we are at ground zero with the consumer,” she said.

Cars and their market are not the only things to keep up with, however. Metro Detroit will witness first-hand the automotive market undergoing major overhauls as Ford plans $1.2 billion in renovations to its Dearborn headquarters and $60 million in urban redevelopments to make way for a new downtown Dearborn in the coming decade. Businesses within Dearborn are expected to reap the benefits in boosted commerce and property values, expediting its path to becoming a notably thriving town.

Although Ford is a GMC competitor, Robin welcomed that company’s projects as “exciting” and a sign that the American automotive industry is making required investments and can compete on a global scale.

She added that as Dearborn, the birthplace and hometown of the most prominent car companies, is already on that track, it’s a prime beneficiary. “I see the changes now,” she said.

“It’s a thriving community; the people that live here love it here.”