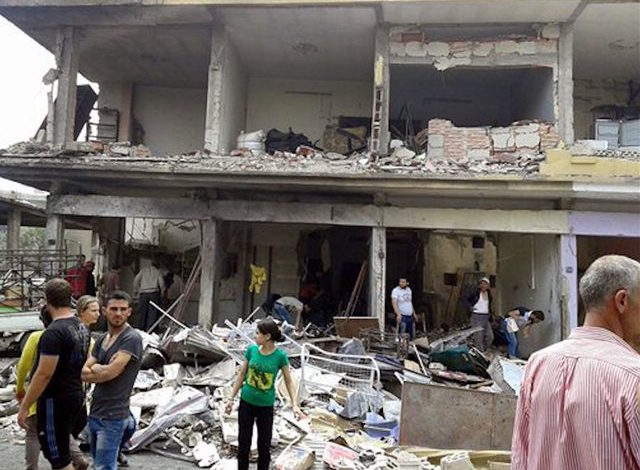 DEARBORN— In political science, the “CNN effect” refers to the effect of round-the-clock 24 hour coverage on wars and humanitarian crises. The term credits such coverage as being instrumental in mobilizing and manufacturing opinion and influencing foreign policy.

Yet, security consultant and analyst Joshua Geis joins numerous scholars in arguing that media narratives had been far too simplistic and accounts far too vague and unverified to actually entice any military action in Syria in the civil war’s peak years.

Prior to the Syrian civil war, freedom of the press was severely restricted in Syria. Damascus denied visas to journalists regarded as antagonistic to the government. The government and Ba’ath party, owning most media outlets, issued bans on information seen as threatening “national unity and security”, parameters arbitrarily defined and instrumental in issuing numerous media blackouts throughout 2012 and 2013.

However, it is still undeniable that throughout the Syrian crisis, a lack of clarity and conflicting information have been the culprits of confusion.
Syria was deemed by the Committee to Protect Journalists as the deadliest for journalists in 2016. In total, CPJ reported that 107 journalists have been reported killed since 2011.

At the time of freelancer and Global Post reporter James Foley’s kidnapping in 2012, suspicions were rife that he had been held by forces loyal to President Bashar Assad.

“International journalists like James Foley and Steven Sotloff are exceptions to the rule,” said Jason Stern, senior research associate for CPJ. “88% of journalists killed in Syria are Syrian journalists killed in their own country. More than half of the journalists killed were killed by government forces.”
Foley’s last column, entitled “Syria: Al-Qaida’s New Playground”, preceded the rising trend of non state actor kidnappings in areas like Aleppo in 2012 and 2013 as Al-Qaida affiliates gained leverage in Syria.

In the rising tides of the civil war, journalist and aid worker disappearances escalated as rebel groups perpetrated kidnappings.
Areas out of the domain of government control, once seen as safe zones for freelance and on-the-ground reporting, had become breeding grounds for kidnappings by foreign funded and armed insurgencies.

Soon, numerous news outlets had resigned Syria as a region too dangerous to allow reporters to be stationed in rebel-held areas.

Yet Syrian journalists continue to the top casualties in their own homeland. Independent Syrian collective “Eye of the Homeland”, a grassroots publication operating from various cities, including Raqqa, has been the subject of numerous threats and targets from Daesh.

Stern reported evacuations from formerly rebel-held eastern Aleppo following the government’s capture of the area in late 2016. “There are journalists in government territory; [the regime] is very strict on who it allows to come to Syria.”

Widely respected journalist and “The Independent” Middle East correspondent Patrick Cockburn expressed criticism of coverage in Mosul, Iraq and Aleppo. In both countries, he writes in “The Independent”, state armies are fighting similarly to take back cities.

The additional similarity, he notes, is that “there are no independent foreign journalists present.”

Jihadis who have held power in eastern Aleppo were the cause of a complete exodus of foreign correspondents and on-the-ground journalists, who also risked abduction or death by staying in these areas.

Bartlett acknowledged that while there are “certainly honest journalists among the comprised establishment media”, she was quick to criticize the alleged absence of on-the-ground journalists in eastern Aleppo. As she asserts, “there are none.”

She also reported that anti-regime forces have been perpetrating violence against civilians in Syria.

Stephen O’Brien, the United Nations under-secretary-general for Humanitarian Affairs, reported more than 20,000 civilians have been displaced and many killed as a result of indiscriminate rebel shelling. The U.N. Envoy for Syria, Staffan de Mistura, also criticized the indiscriminate rocket warfare launched during the rebel offensive in Aleppo.

The risks journalists face, leading to their evacuation, contributed to the monopolization of the news narrative levied by terrorist forces and Al-Qaida affiliates.
“In 2013, journalists had been kidnapped once a week,” Stern said. “That rate has slowed, in terms of killings and jailings and kidnappings.”

Stern observed this as a sign that Syria had become more dangerous, not less, as “journalists have been forced to flee the country and international journalists have not been coming in as before.”

“Even if they want political change in the future, right now they want the current government they have,” Bartlett told Russia Today in October.

The insatiable demand for coverage contrasts with the dearth of information on Syria. “There’s a cost [to news],” Stern said. “All throughout Syria, there are journalists risking their lives; and its on us to listen.”