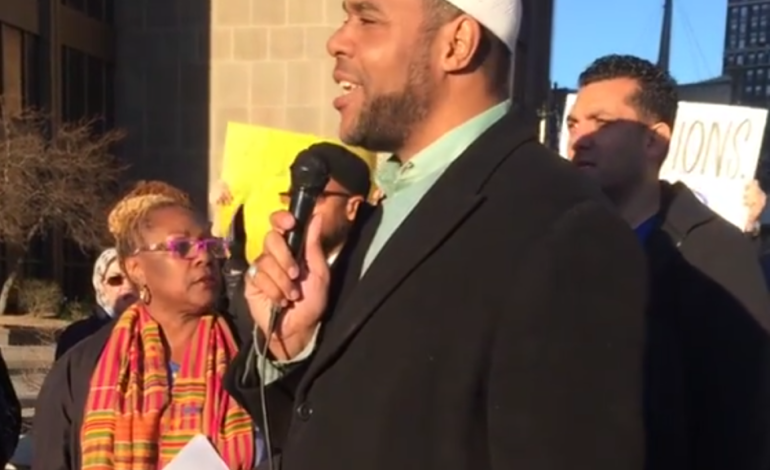 Dawud Walid of CAIR-MI speaking at a rally in Detroit against Muslim ban 2.0 - Photo by The AANews

DETROIT— In a frantic attempt to salvage any attempt at positive PR following the chaotic and complicated fallout of President Trump’s January 27 executive order, the president issued a revised travel ban, “Executive Order Protecting The Nation From Foreign Terrorist Entry Into The United States”, omitting Iraq from the list and permitting those who have obtained visas prior to January 27 to enter.

These approved visas include green cards, according to the White House statement on the new executive order. The new legislation also bans refugees worldwide from entering the U.S. for a period of 120 days.

The new order, signed March 6 and taking effect March 16, seeks to mitigate the backlash the first executive order faced from many American nationals, all of whom were unnecessarily inconvenienced by its arbitrary and destructive provisions.

The order cites “the close cooperative relationship between the United States and the democratically elected Iraqi government, the strong United States diplomatic presence in Iraq, the significant presence of United States forces in Iraq and [its] commitment to combat ISIS” as reasons for Iraq’s omission.

The order also attributes increased vetting by the Iraqi government as a justification for its removal from the category of countries from which Trump has taken measures to restrict immigration of primarily Muslim nationals.

However, civil rights groups and critics maintain that his sequel is just as atrocious as the original. Though a student, green card holder or small child in need of medical care may now be able to enter, the order continues to place undue scrutiny on Muslim travelers, true to its intent.

By revoking parts of the order, Donald Trump showed some response to the onslaught of resistance against the ban. Yet CAIR National Director Nihad Awad, while acknowledging the new order as a “partial victory”, called upon supporters “to not be complacent.”

The repackaging of the bill, it is argued, is a means to pass through legislation that has been decried as unconstitutional and proven disastrous, in order to accomplish the same ends the first failed to achieve.

“We believe this desired policy outcome is in fulfillment of Donald Trump’s campaign pledge to ban Muslims from entering the U.S.,” Awad said. “This new executive order still stigmatizes the faith of Islam and Muslims”, despite the new law’s removal of the special protections of persecuted religious minorities.

CAIR-MI Executive Director Dawud Walid said at a rally in Detroit on Tuesday that, “despite its supposedly religious neutral language, we know that this is a clear xenophobic Muslim ban.”

Alluding to Trump’s campaign promises to stop the flow of Muslim immigrants and refugees into the U.S, Walid referred to the second executive order as not asunder from the original’s purpose.

“We know that it’s a Muslim ban because he said so on the campaign trail, that he wanted to block immigration and refugees coming to America,” Walid said, adding that former New York Mayor Rudy Giuliani, “admitted on national TV that he was going to craft a ban that would be somewhat neutral in language but serve the same purpose of banning Muslims.”

Recently, reports detailing increased questioning of bothAmerican Muslim citizens and foreign travelers with the intent to profile have increased in frequency.

The inquiries, indicating discriminatory and maligned views on Islam, included questions such as “how many times a day do you pray?” or if they believed it was okay to beat their wives.

Even Muhammad Ali, Jr., the son of the late boxing legend Muhammad Ali, was not immune to profiling. The Philadelphia-born Ali was detained at an airport in Florida and questioned on February 25.

“Again, what [Donald Trump] wanted was a Muslim ban and that’s the direction he went with this,” Abed Ayoub, legal and policy director at the American-Arab Anti-Discrimination Committee (ADC), said in a talk on Piers Morgan early on Tuesday, reiterating that “this ban [had] nothing to do with security.”

Under section 11 of the new executive order, titled “Transparency and Data Collection”, the secretary of homeland security and the attorney general will be tasked with overseeing and managing information on “foreign nationals” who have been found to support terrorism, been radicalized after entry into the U.S. and/or participated in “gender-based violence” in the form of “honor killings”, along with “any other information relevant to public safety” concerning foreigners.

The longstanding counter-extremist program, “Countering Violent Extremism”, was renamed and repurposed as “Countering Islamic Extremism” in early February. Ignoring the gender and racebased radicalization and violence perpetuated in the United States by neo-Nazis and other hate groups, the changes both fail to address the emboldened wave of right wing extremism— some of which has endorsed the president— and continues to cast Islam and Muslims under a negative light.

Omar Jadwat, director of the ACLU’s Immigrants’ Rights Project, affirmed that, “The only way to actually fix the Muslim ban is not to have a Muslim ban.”