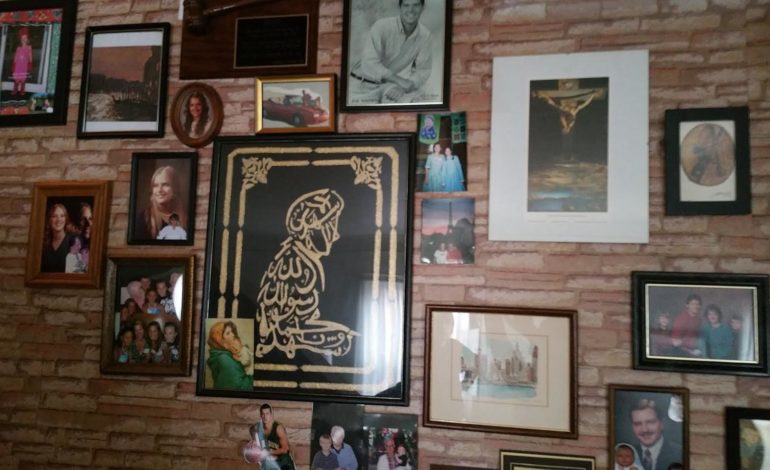 Islamic portrait hanging near a cross in John and Carol Bodary's home , Photo by The AANews DEARBORN — If there’s one policy people can learn from a couple living in Dearborn for more than 30 years, it would be inclusivity.

John and Carol Bodary got married in 1984, the year Carol moved to Dearborn. However, John has been living in the city since he was born in 1930. Carol was born in 1937.

“We both got a lot of experiences with different cultures,” she said. “We were both always very open to everything and so we got involved with the Arab families in Dearborn.”

John said Dearborn was all White at first.

“When I grew up, all Arabs lived in Saline, went to Fordson High and got on the bus and went back,” he said.

But it started to change as more and more people began moving out.

John decided that he wouldn’t be one of the people “packing up”, because he wanted to see the transformation.

“What we found was really good news,” he said.

He shared an example.

“At Christmas time, we got gifts from three of the families around here,” he said. “It has paid off for me because they’re the best neighbors I’ve ever had.”

“They feed you when I go to Europe,” Carol chimed in.

John agreed and added that “in Ramadan, we get [food] at 10 o’clock at night.”

He also shared the couple’s appreciation for the businesses in Dearborn.

Carol said they always tell people that the Arabs who moved to east Dearborn saved it.

“This part of town was going down,” she said. “The houses were not being cared for as much. As the Arabs moved in, everything got better.”

After September 11, John said their neighbor’s child, Hamoudi, was competing in a contest at school, but his mother, Khadija, said she did not want to go after a bad incident at the market.

At the time, Carol forced her to; she even drove her there and walked her through the event.

“That’s just the way [the relationship] has developed,” John said. “If something goes wrong, they are there for us and we’re there for them.”

Carol said 9/11 also had their adult children expressing concern about them living in Dearborn.

“I would say, ‘We’re safer here than you are,'” she laughed.

She said there are bad people in every race and that it doesn’t make all people from a particular ethnicity or all followers of a particular religion bad.

“Having been to seminary, I know a lot of priests,” John added. “One of them was my counselor at a summer camp. He was teaching at the seminar and we were up north playing golf. I mentioned [life in Dearborn]. He said, ‘I am going to teach a group of people to be ministers of service. Will you come and talk about how you fit into that neighborhood, because that’s the hardest thing for me to get across?'”

John ended up speaking to the group about his experiences and teaching them about the importance of inclusivity.

When people ask why he stays in Dearborn, he always answers, “Why would I leave? I feel at home here.”

Carol said a neighbor gave her an Islamic prayer portrait as a gift. It’s one of many pieces of art on a wall in their home. She hung it near a picture of a cross.

John added that they’ve also gotten a crucifix as a gift from a Muslim friend. He said crossing cultures is being accepting, just like that.