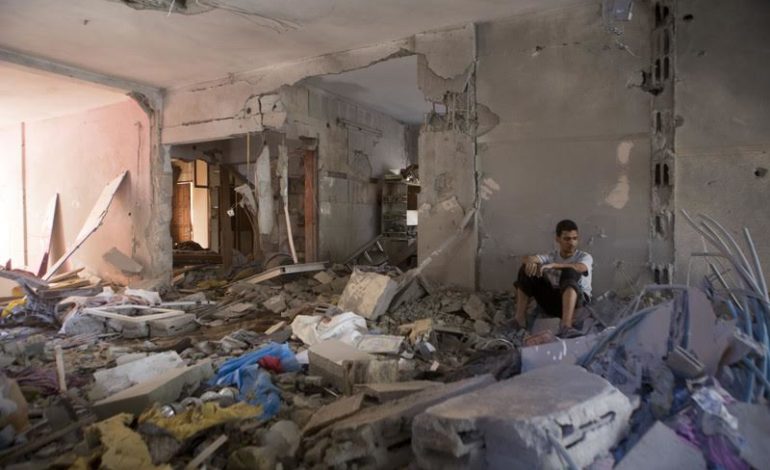 A man sits in a building in a Gaza City neighborhood, which was destroyed the previous night by an Israeli airstrike, July 16 - Photo by ActiveStills

At a glance, Israel appears a true democracy. Take a closer look and that facade of democracy will soon dissipate, turning into something else entirely.

Tuesday, February 28 was one of those moments. The chain of events was as follows:

An official Israeli state comptroller issued another report on the Israeli government’s handling of the July 2014 war on Gaza; it chastised Israeli Prime Minister Benjamin Netanyahu and then-Defense Minister Moshe Ya’alon — among others — for the lack of preparedness and for their mishandling of the subsequent 51-day conflict. Netanyahu reacted angrily; Ya’alon took to Facebook to defend his record; the opposition in the Israeli Knesset went on the offensive; politicians lined up, taking sides; a media frenzy followed; the country was in an uproar.

This is not a precedent. It is a repeat of a recurring scenario that often follows Israel’s military plunders. When such reports are issued, Israelis sort out their differences in fierce parliamentary and media battles.

While Israelis begin to examine their failures, demanding accountability from their government, Western mainstream media finds the perfect opportunity to whitewash its own record of failing to criticize Israel’s military onslaught at the time.

More than 2,200 — of whom more than 70 percent were Palestinian civilians — were killed and thousands more wounded in Israel’s so-called “Operation Protective Edge” in 2014. According to U.S. media logic, for example, Israel’s investigation of its own action is a tribute to its thriving democracy, often juxtaposed with Arab governments’ lack of self-examination.

When Israel invaded Lebanon in 1982, instigating a war that resulted in the deaths of tens of thousands of Lebanese and Palestinians, culminating in the Sabra and Shatilla massacres, a familiar scenario ensued: The United States did its utmost to prevent any international intervention or meaningful investigation, while Israel was allowed to investigate itself.

The outcome was the Kahan Commission Report, the conclusion of which was summarized by international law expert Professor Richard Falk: “The full measure of Israel’s victory is rather its vindication, despite all, as a moral force in the region — as a superior state, especially as compared to its Arab rivals.”

The U.S. media touted Israel’s “moral victory”, which, somehow, made everything okay and, with a magic wand, wiped the record clean.

The Washington Post editorial led the congratulatory chorus: “The whole process of the Israeli reaction to the Beirut massacre is a tribute to the vitality of democracy in Israel and to the country’s moral character.”

This sorry state of affairs has been in constant replay for nearly 70 years, ever since Israel declared its independence in 1948.

International law is clear regarding the legal responsibility of occupying powers, but since Israel is rarely an enthusiast of international law, it has forbidden any attempt at being investigated for its actions.

In fact, Israel abhors the very idea of being “investigated.” Every attempt by the United Nations, or any other organization dedicated to upholding international law, has either been rejected or failed.

By Israeli logic, Israel is a democracy and democratic countries cannot be investigated over their army’s involvement in the deaths of civilians.

This was, in fact, the gist of the statement produced by Netanyahu’s office in June 2010, soon after Israeli army commandos intercepted a humanitarian aid flotilla on its way to Gaza and killed 10 unarmed activists in international waters.

Israel is an occupying power under international law and is held accountable to the Fourth Geneva Convention. The international community is legally obliged to examine Israel’s conduct against Palestinian civilians and, needless to say, against unarmed civilians in international waters.

Israel’s record of investigating itself, aside from being spun to praise Israel’s moral superiority, has never been of any help for Palestinians.

In fact, the entire Israeli justice system is systematically unjust to occupied Palestinians.

The Israeli rights group Yesh Din reported that out “of the 186 criminal investigations opened by the Israeli army into suspected offenses against Palestinians in 2015, just four yielded indictments.” Such indictments rarely yield prison sentences.

The recent indictment of Israeli soldier Elor Azarya— sentencing him to a now-postponed term of 18 months in prison for the killing in cold blood of an alleged Palestinian attacker— is an exception, not the norm. It has been years since an Israeli soldier was sentenced. In fact, several thousand Palestinian civilians have been killed between the last time a “manslaughter” conviction was handed down on an Israeli soldier in 2005 and Azarya’s indictment.

Azarya, now perceived by many Israelis as a hero, has received such a light punishment that it is less than that of a Palestinian child throwing rocks at an Israeli occupation soldier.

Some United Nations officials, although powerless before the U.S. backing of Israel, are furious.

The 18 month verdict “also stands in contrast to the sentences handed down by other Israeli courts for other less serious offenses, notably the sentencing of Palestinian children to more than three years’ imprisonment for throwing stones at cars,” U.N. human rights spokeswoman Ravina Shamdasani said in response to the Israeli court decision.

While pro-Israel social media activists and media pundits went on to praise the supposedly unmatched Israeli democracy, a campaign in Israel to pardon Azarya continues to garner momentum. Prime Minister Netanyahu is already on board.

Not only is the Israeli justice system unjust to Palestinians, it was never intended to be just. A careful reading of the recent comptroller’s remarks and findings would clarify that the intent was never to examine war against a besieged nation as a moral concept, but the government’s inability to win the war more effectively: The breakdown of intelligence; Netanyahu’s lack of political inclusiveness; the death of an unprecedented number of Israeli soldiers.

Israel’s appetite for war is, in fact, at an all-time high. Some commentators are arguing that Israel might launch yet another war so as to redeem its “mistakes” in the previous one, as stated in the report.

But war itself is a staple for Israel. Hard-hitting Israeli journalist Gideon Levy’s reaction to the comptroller’s report says it best. He argued that the report is almost a plagiarized copy of the “Winograd Commission Report” that followed the 2006 second Lebanon war.

All wars since 1948 “could have been avoided,” Levy wrote in Haaretz. But they were not, frankly, because, “Israel loves wars. Needs them. Does nothing to prevent them and, sometimes, instigates them.”

This is the only way to read the latest report, but also all such reports, when war is used as a tool of control; to “downgrade” the defenses of a besieged enemy; to create distraction from political corruption; to help politicians win popular support; to play, time and again, the role of the embattled victim and many other pretenses.

As for Palestinians, who are neither capable of instigating or sustaining a war, they can only put up a fight, real or symbolic, whenever Israel decides to go for yet another bloody, avoidable war.

No matter the outcome, Israel will boast of its military superiority, unmatched intelligence, transparent democracy and moral ascendancy; the U.S., as well as Britain, France and other Europeans, will enthusiastically agree, issuing Israel another blank check to “defend itself” by any means.

Meanwhile, any attempt at investigating Israeli conduct will be thwarted; for Israel is a “democracy” and, for some reason, self-proclaimed democracies cannot be investigated. Only their sham investigations matter; only their dead count.

Dr. Ramzy Baroud has been writing about the Middle East for more than 20 years. He is an internationally-syndicated columnist, a media consultant, an author of several books and the founder of PalestineChronicle.com