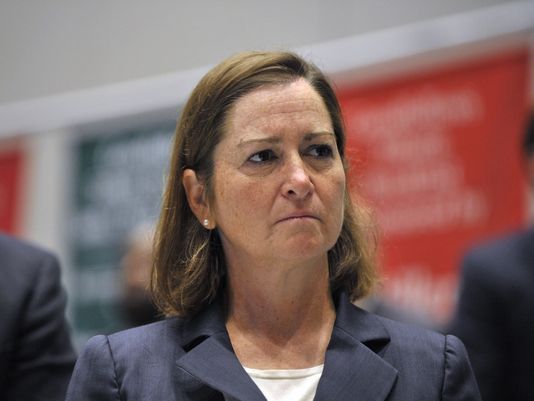 DETROIT — Barbara McQuade says she’s stepping down as U.S. attorney for eastern Michigan at the request of President Donald Trump.

McQuade has been head of the U.S. Attorney’s Office since 2010. But it’s common for the job to change hands when a new president takes office. She said Friday it’s been an “incredible privilege” to work with other public servants as the government’s top law enforcer in a 34-county region.

McQuade, who was born in Detroit and attended the University of Michigan, is among the 46 attorneys who have been dismissed by the Trump administration.

Under McQuade’s leadership, her office successfully prosecuted former Detroit Mayor Kwame Kilpatrick on corruption charges. The case against a southern Michigan militia was one of the government’s few high-profile losses. In 2012, a judge cleared seven members of the Hutaree militia, who were charged with plotting war against the government.

Below is a transcript of the release from the U.S. Attorney’s office ― Eastern District of Michigan:

McQuade, the first woman to serve as U.S. Attorney for the Eastern District of Michigan, was appointed by President Barack Obama, and sworn in on January 4, 2010.

During her tenure, McQuade has overseen a number of significant cases, including the conviction of former Detroit Mayor Kwame Kilpatrick and more than 30 others on public corruption charges; the conviction and life sentence of an Al-Qaeda operative for attempting to blow up an airliner over Detroit on Christmas Day in 2009 with a bomb concealed in his underwear; the conviction and 45-year sentence Dr. Farid Fata for lying to patients about having cancer so that he could bill Medicare for expensive chemotherapy treatments; the conviction and $4.3 billion fine against Volkswagen AG for cheating on emissions tests; the conviction and $1 billion fine against Takata Corp. for fraudulently concealing defective airbags; and settlements with Pittsfield Township to permit the building of an Islamic School and with the City of Sterling Heights to permit the building of a mosque under religious land use laws.

McQuade also joined with other law enforcement leaders to launch Detroit One, a violence reduction strategy and community partnership. Since Detroit One began in 2013, homicide rates, non-fatal shootings and carjackings in Detroit have decreased. A key component of the initiative is the Ceasefire gang intervention program. A similar enforcement initiative, Flint First, was recently launched in Flint.

Upon taking office, McQuade restructured the office for the first time in 35 years to focus attorney resources on district priorities. At that time, McQuade created new units dedicated to violent crime, public corruption, health care fraud and civil rights. Each unit has seen robust enforcement activity. McQuade’s vision has been to use the resources of the U.S. Attorney’s Office to improve the quality of life for the people of the Eastern District of Michigan, focusing on enforcement, prevention and community trust.

“I have loved serving in this job as much as anyone has ever loved any job,” McQuade said. “It has been an incredible privilege to work alongside public servants who devote their tremendous talents to improving the quality of life in our community. I am proud to have served as U.S. Attorney in the Obama Administration.”

Before becoming U.S. Attorney, McQuade was an Assistant U.S. Attorney in Detroit for 12 years, serving as Deputy Chief of the National Security Unit. She prosecuted cases involving terrorism financing, foreign agents, export violations and threats, and served as the district’s Crisis Management Coordinator.

McQuade practiced law at the firm of Butzel Long in Detroit from 1993 to 1998, and served as a law clerk to Hon. Bernard A. Friedman on the U.S. District Court for the Eastern District of Michigan from 1991 to 1993. From 2003 to 2009, McQuade served as an adjunct professor at the University of Detroit Mercy School of Law, teaching criminal law in the evenings.

The Eastern District of Michigan covers 34 counties and six million residents. The United States Attorney’s Office, with staffed offices in Detroit, Flint and Bay City, has 115 attorneys and another 100 support professionals, and conducts all criminal and civil litigation in the district involving the United States government.”