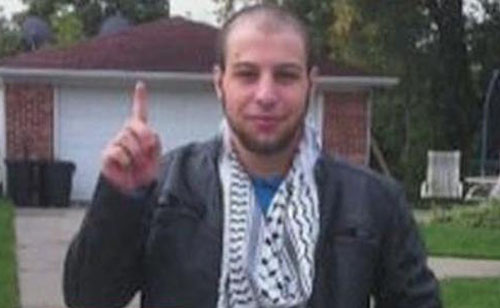 DEARBORN HEIGHTS- On Monday, the sentencing for Khalil Abu Rayyan, a Dearborn Heights man accused of supporting ISIS, was postponed after Detroit’s federal courthouse was ordered closed due to harsh weather.
At 4 p.m., an hour into sentencing, U.S. District Judge George Caram Steeh declared that the U.S. District Court was ordered closed and sentencing would have to continue on March 27.
Last year, Abu Rayyan, 22, had pleaded guilty to charges of false statement to obtain a firearm and illegal possession of a firearm.
In 2015, the FBI kept an eye on him after he bragged about plotting a shooting at a Detroit church. However, he was not charged with terrorism-related crimes.
The sentencing plans call for 15 to 21 months in jail. Rayyan has been in federal incarceration for more than 13 months.
Abu Rayyan’s defense lawyer Todd Shanker wrote on March 2 in a sentencing note that the man condemns ISIS and understands Islam better now.
“Rayyan now unequivocally denounces ISIS — its predations, brutality and terrorism,” Shanker said. “He now has a more informed understanding of his faith and the bastardization of the religion by radical elements (like ISIS).”
However, the U.S. Attorney’s Office wants him jailed for eight years to protect the public.
“If there were any doubts that Abu Rayyan was serious, his previous conduct dispelled them,” Assistant U.S. Attorney Ron Waterstreet said in court records. “He spent years dedicated to ISIS — promoting and celebrating the terrorist organization’s aims. He exulted in some of ISIS’s most gruesome violence. He bragged about wanting to behead people.”
Shanker wants Steeh to make the sentence only 15 months of imprisonment.
If he does, Abu Rayyan would get credit for the time he served in federal detention and would be out in a few months. Also, he will mostly likely be placed under supervision by the federal court.