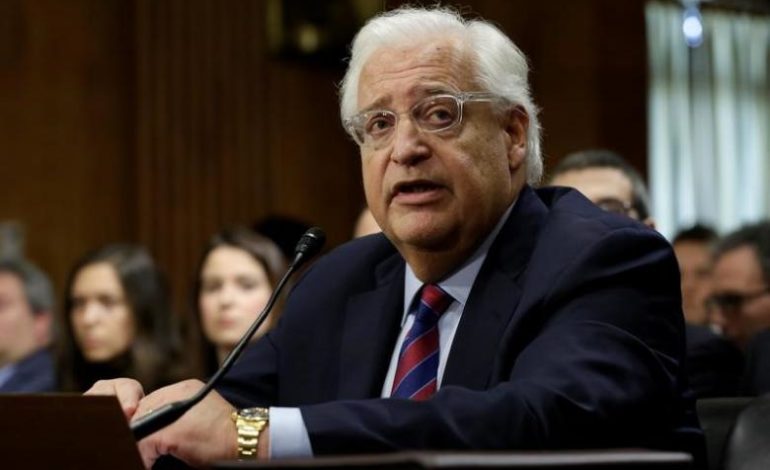 American ambassadors are stationed in nearly 200 countries across the globe, each of which has a unique relationship with the United States. Depending on the diplomatic conditions and challenges present, an ambassador’s responsibilities and functions can vary widely from country to country. At the most fundamental level, however, all ambassadors share a common mission: to represent the national interests and policies of the U.S.

David Friedman, President Trump’s nomination for ambassador to Israel, is unable to fulfill this basic obligation because his loyalties lie elsewhere, and this is clear from his own statements and views.

In a video address to Trump supporters in Jerusalem, Friedman promised “a Trump administration will never pressure Israel into a two-state solution or any other solution that is against the will of the Israeli people.” He pledged that America’s U.N. ambassador would veto every resolution hostile to Israel.

Perhaps Friedman is unaware that his duty is to serve the interests of the American people, not pander to Israelis. If he was the trained diplomat that such a sensitive ambassadorship post requires, he would know this. Instead, Friedman’s main qualification is that he is Trump’s former bankruptcy lawyer.

Almost 70 percent of U.S. ambassadors are “career ambassadors.” These are professional diplomats who have completed vigorous training through the U.S. Foreign Service, and they are usually recommended to the president by the Department of State based on their merit. Naturally, these ambassadors typically take on the “tough” assignments.

The remaining ambassadors are “political ambassadors” appointed by the president, usually as a reward for their political support. In many cases, these non-career ambassadors have little to no diplomatic experience, and yet they land some of the “cushier” posts. In essence this is a form of cronyism, but nevertheless it is a longstanding tradition practiced by all presidents.

Of the 19 ambassador appointments to Israel since 1949, only four (three individuals, Martin Indyk served twice) have been political appointees. This pattern makes sense. As the chief belligerent in a highly sensitive conflict, Israel strongly qualifies as a “tough” assignment and therefore should be the responsibility of a professional diplomat.

Yet, even the three political appointees to Israel possessed some relevant experience for the job. For example, Daniel Shapiro and Martin Indyk both served on the U.S. National Security Council, which advises presidents on foreign policy matters. Frankly, the mere fact that they are Zionists poses a conflict of interest, but at the very least they have some kind of foreign affairs knowledge.

Unfortunately, David Friedman does not possess the professional qualifications needed to handle such a delicate diplomatic assignment. Even worse, he is ethically incompetent to be in such a position. His views regarding Palestine and Israel are dangerous, bigoted and contradictory to U.S. policies on the issue.

Writing for an Israel right-wing media outlet, Friedman describes the two-state solution as an “illusory solution in search of a non-existent problem”, while condescendingly insinuating that Palestinians are too corrupt to rule themselves.

He is also a staunch supporter of Israeli settlement expansion and he leads an American non-profit organization called the American Friends of Beit El Institutions, which provides funding to one of the “most radical” of Israeli settlements, Beit El. In other words, Friedman supports the colonization and theft of Palestinian land. It is that plain and simple. Despite all of its support for Israel, the U.S. maintains the official position that Israeli settlements in the West Bank and Jerusalem are illegal, so it is absolutely mind-boggling that such a blatantly biased individual would even be considered for the Israel ambassadorship.

Friedman also shamelessly accused the Department of State of being anti-Semitic and anti-Israel for the past 70 years (the anti-Semitism charge is a preferred weapon of Zionist propagandists). This is the same institution that he intends to join and the same one that has provided unparalleled diplomatic protection to Israel ever since it was created. To say that Friedman is ungrateful is an understatement.

Friedman’s appointment was recently approved by the U.S. Senate Foreign Relations Committee in a rather controversial and close 12-9 vote that largely played out along party lines. With a Senate dominated by Republicans, it is very likely that his appointment will be confirmed. Senator John McCain, a member of the Senate Foreign Relations Committee, had previously criticized some of President Obama’s ambassadorial appointments for their lack of qualifications, but unfortunately this was not an issue for him with respect to David Friedman.

To any reasonable observer, the choice for Friedman as ambassador to Israel is an obvious conflict of interest. Despite what Zionists would like us to believe, the reality is that Israel jeopardizes American interests and security abroad and it is antithetical to our values. The idea of sovereignty is very important to Americans and we should never support a foreign entity that infringes on the freedom and human rights of another people.