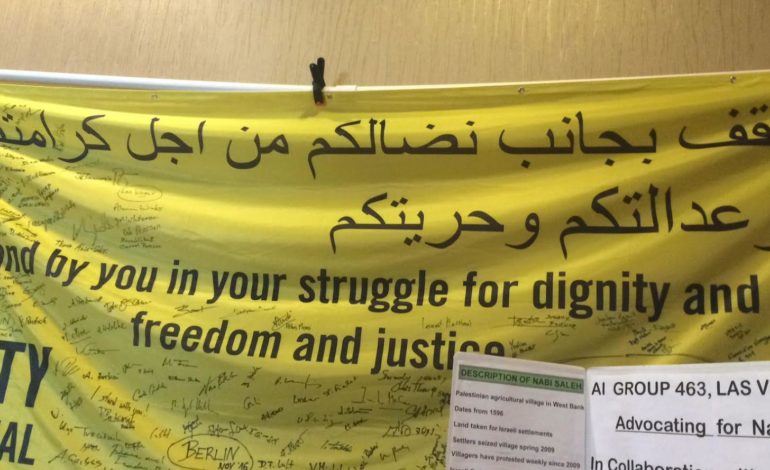 Banner by Amnesty International U.S.A. in soldarity with Nabi Saleh

ALBUQUERQUE — Issues affecting the Middle East continued to be brought to light at the 2017 annual general meeting of Amnesty International U.S.A. members, which gathered human rights advocates from around the nation.

The plight of refugees worldwide was commemorated in the #NoBanNoWall campaign— a slogan in defiant response to President Trump’s second Muslim Ban.

Additionally, panels and campaigns from within the organization continued to shed light on the ever escalating situation in Gaza and the occupied West Bank.

Both killings occurred during mostly non-violent protests against the Israeli occupation and the theft of land along with the confiscation of their historic water spring by the nearby settlement of Halamish.

Amnesty International has called upon Israeli Defense Minister Avigdor Lieberman to ensure that security officers responsible for the killings, and for the injury of others in the village, are brought to justice.

The shootings were instances in an ongoing campaign against the West Bank village’s Palestinians.

The footage of an armed Israeli soldier attempting to arrest a frightened 11-yearold Mohammed Tamimi, who had a broken arm, received widespread condemnation in 2015.

The footage was shot by the boy’s father, Bassem Tamimi, in August of that year.

An annual report by Amnesty International details the human rights conditions each country faces. Palestine’s human rights evaluation, as outlined by Amnesty’s 2017 report, condemned the “torture and other ill-treatment of [Palestinian] detainees” by Israeli soldiers, which “remained rife and was committed with impunity.”

The report also detailed forced evictions, demolitions and unlawful killings by Israeli authorities. What’s more, 1,089 homes were demolished in the West Bank, contributing to the forced eviction of more than 1,593 people.

“Amnesty International opposes the transfer of fuel, munitions, equipment and weapons that have been linked to the violation of international humanitarian law and human rights standards,” stated a panelist during a discussion on “Arms transfers to the Middle East and North Africa.” This provision is also held up by domestic law, such as the Leahy law, and other measures and policy statements.

The panelist mentioned an Amnesty International report called “Fueling the Conflict” that showed how  the sale of munitions to both Israel and Hamas was a culprit for spurring conflict.

“Cluster munitions are war crimes,” another panelist said, referring to the indiscriminate weapons Saudi Arabia is using in Yemen that are a violation of international law.

The United States, however, was emphasized as responsible for the sale of munitions to Israel and Saudi Arabia.

Israel, a military state marked by its employment of systematic brutality, may be closer to home than most Americans realize.

At a Saturday panel during the conference, audience members were reminded of the insidious connection between state sponsored police brutality in the US and Israel.

Garwood also referenced the US NYPD office in Kfar Saba, Israel opened up in September 2012.

“They [Israel] are considered by law enforcement as the experts on how to deal with popular uprising,” she said, saying U.S. police forces need training, but Israel, a nation with a long history of human rights violations, is not the right partner for doing it.

Lack of accountability and impunity following unwarranted deadly force are problems experienced in both the US and Israel.

Similar concerns, namely with the misuse of tear gas and the recurrence of US built weapons in attacks against civilians were major concerns well.

The Amnesty country specialists encouraged members and viewers to contact their senators and representatives and ask them to halt and review all arms transfers to Egypt and Saudi Arabia until safeguards are put in place to guarantee U.S. supplied weapons aren’t used in violation of the Laws of War or human rights standards..

Garwood also emphasized that this humanitarian concern was not one bound by party lines. “Under two Republicans, arm [sales] were held up to Israel when there were concerns.”

Nate Smith, the Amnesty specialist for Military, Security and Police matters, also recalled that President Obama had stopped cluster munitions in 2015, and the condemnation of an arms transfer to Saudi Arabia has also been bipartisan in 2015.