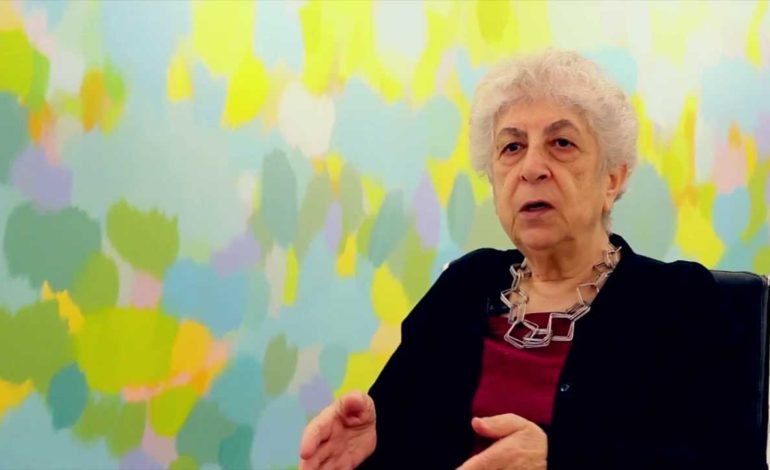 Palestinian painter Samia Halaby has blunt advice for aspiring Arab artists — get your inspiration firsthand, whether from ordinary people or historical documents, avoiding the “lies” of the media.

Halaby, who made her name with abstract paintings, drew on both kinds of source for her most overtly political project, a series of drawings of the 1956 massacre of Palestinians by Israeli border police at Kafr Qasem.

The drawings, and a separate exhibition of her multicolored abstracts called “Illuminated Space”, make up a Halaby double bill on display at Dubai’s Ayyam Gallery for Dubai Art Week.

“My advice to young aspiring artists in the Arab world, and other similar countries that are torn by political, economic and social problems caused by imperialist challenges, is to concentrate on history and its details and to not follow the existing media, because there are a lot of lies,” she told Reuters. “They should be attentive to their surroundings and their societies … specifically the common class of society.”

The Kafr Qasem project grew out of a 1999 visit to the village where, on Oct. 29, 1956, Israeli border guards killed 48 people and an unborn child.

More than half the dead were women and children.

The victims were returning home from work across the de facto border between Israel and Jordan, unaware that they were infringing a military curfew declared on the eve of war with Egypt. Israel’s late president, Shimon Peres, formally apologized for the massacre in 2007.

“I started to draw about my experience and, as time went by, I realized that it was an extremely significant experience,” Halaby said.

She not only drew more, but also interviewed villagers and sought documentation.

The book that emerged last November, “Drawing the Kafr Qasem massacre”, is more than a collection of drawings; much of it is devoted to interviews with the survivors.

So, how does this political engagement fit with the better known abstract works of an artist who was born in Jerusalem in 1936, but left her homeland upon the creation of Israel in 1948 and has made her life in the United States?

“Palestine is very present in my life, but when you ask me where it lies in my paintings— it exists, but you wouldn’t find one of my abstract paintings about Palestine,” she said. “You can’t find Palestine in the paintings’ titles.

“But it has affected me differently, by making me politically progressive, which made me think about art and what it is,” she added “…Hence my choice of abstract art— because it is an optimistic kind of art, a futuristic one, rather than an art that lives in the past.”