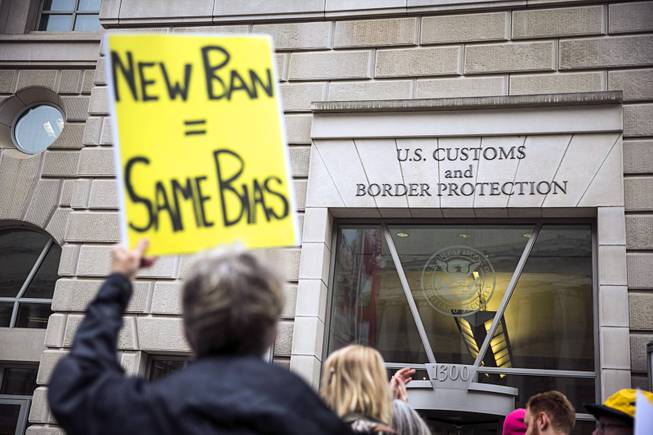 Trump’s doctrine propels the U.S. into a perpetual war waged against the very fabric of a diverse America.

If Donald Trump should learn one thing, it’s that sequels to bad movies are usually, if not always, equally as abysmal.

The blocking of the president’s latest executive order by two federal judges— Derrick K. Watson of Hawaii and Theodore D. Chuang in Maryland— has reiterated the clear message that echoes the sentiments of many Americans objections against this clear, poorly veiled assault on democracy, civil liberties, human rights and the Constitution.

In a brash move to attempt to quell the righteous outrage of a diverse constituency opposing his discriminatory moves to ban Muslim immigrants, green card holders, students and travelers from seven Middle Eastern and North African nations, Donald Trump attempted to haphazardly reorder and amend parts of his original January 27 executive order to mitigate the negative impact it wrought.

These changes, initiated through an updated executive order signed March 6 and set to be implemented March 16, could hardly be described as cosmetic.

Written with a slightly more pungent aura of trepidation that deviates slightly from Trump’s reckless rhetoric, the order ultimately and nonetheless upholds his campaign aims of “stopping all Muslims from coming into the United States.”

As long as the intent behind the executive order— which rests on the discriminatory practice of placing foreign nationals under scrutiny as indiscriminate potential terrorists— remains unchanged. it remains no less a discriminatory and unconstitutional legislation as the original Jan. 27 version.

The new ban allegedly offers some relief to Iraq on the grounds of increased cooperation and vetting by the Iraqi government, but it is every bit as merciless and discriminatory as the first in that it offers no break to the thousands of other asylum seekers who’ve been bombed for years before having to deal with the blow of these two bans.

The second order even brings the domestication of that xenophobia to a new level by advocating increased surveillance and establishing a Muslim registry. An insidious laundry list of provisions that seek to document everything from “individuals with terror-related offenses” and “foreign nationals who have been radicalized” to documented “foreign-national” specific cases of “honor-killings” in the U.S. all but exempts instances of White nationalist and non-Islamic crime to further single out Muslims in the nation.

Trump’s long-standing falsity that “we don’t know who these people are” ignores the scrutinizing, 18 to 24-month vetting process that complicated the already excruciating process of asylum for individuals and families fleeing violence. Thanks to his new executive order, the admittance count for refugees has been slashed from 110,000 to just 50,000.

Meanwhile, the architects and advocates for the executive order consist of a hodgepodge of uber-nationalist xenophobes unaccustomed to its consequences, much less of the reality of the nature and challenges of America’s refugees, but are well acquainted with a self-generated “alternative-fact” farcical reality of White supremacist rhetoric.

To them, immigrants illustrate an irrational fear of an America that is less White and less Christian.

For Trump, as well as his closest advisors, it’s better to increase funding for deportations and add to military spending while slashing diplomatic and social efforts, as evidenced in his recent intent to cut nearly 30 percent of funding received by the State Department and U.S. Agency for International Development.

Trump’s doctrine clearly rejects diplomacy in lieu of further propelling the U.S. into a perpetual war. Yet this is no longer a war that pits the United States against external enemies— real or imagined. This is a war clearly waged against the very fabric of a diverse and eclectic America itself, an America where immigrants were not only a fixture of past and present, but crucial elements of this nation’s foundation. History has taught us, from the World War II internment camps that incarcerated Japanese, sedition acts sanctioned against Asians and violence against Eastern Europeans, Irish and Italians, that the annals of our past should not dictate the policy of our present.