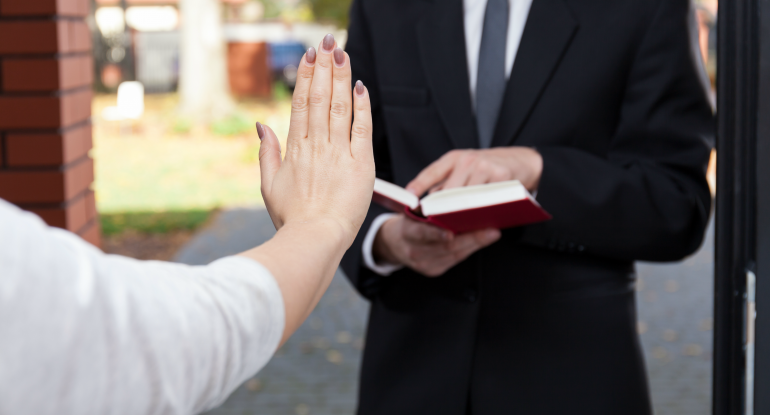 DEARBORN —Having the highest concentration of Arab Americans, primarily Muslims, in the country has brought Dearborn to the attention of Christian missionaries, not all of whom declare their intentions openly.

The city’s annual Arab International Festival, a three-day family event celebrating Arab culture, attracted both anti-Islamic protestors and Christian missionaries from around the country every year. The missionaries proselytized, handed out pamphlets, Bibles and even Christian children’s books in order to convert the young. But they neither verbally assaulted the crowd nor caused trouble.

Another group, however, chose a different approach.

In 2012, a group calling itself Bible Believers came to Dearborn to protest Islam at the festival. Members carried a pig’s head on a stick, engaged in street preaching, held signs against Islam and told Muslims that they would “burn in hell.”

Tempers flared and some attendees threw bottles and other objects at Bible Believers members. As a consequence, the American Arab Chamber of Commerce indefinitely canceled the festival that had begun in 1995.

In late February, word spread about a new coffee shop called Common Grace Coffee Company that had some Dearborn Muslims on edge. Controversy broke on social media as screenshots of shop owner Dale Tremblay-Dulong’s profile on the missionary website “Commission to Every Nation” surfaced among Dearborn residents. The shots have since been deleted, though a cached page can still be found online, but community members were still concerned for the young, since the profile hinted that Tremblay-Dulong had moved to the city on a mission to convert Dearborn Muslims.

The AANews spoke to Tremblay-Dulong two weeks ago, but he did not want to mention anything about his mission or profile. Instead, he said that the coffee shop is for “people…that would not normally come together to sit at the same table, lay aside their differences…learn more about who we are as different people with unique cultures.”

This week, The AANews interviewed two Muslim community members about their experiences with missionaries and their main concern, which mostly revolved around the idea of deception. We also spoke to Father George Shalhoub of The Basilica of St. Mary, an Antiochian Orthodox Christian church in Livonia, and Sayed Hassan Qazwini, former imam at the Islamic Center of America, to share their religious perspectives on the matter.

“Putting up a front and deception”

A Lebanese American woman who asked to be called Rima, 30, said she had encountered a missionary at a local Starbucks while an undergraduate. Instead of openly announcing his intentions, he feigned friendship and tried to convince her to remove her hijab, as well as to convert.

“I would be approached by this guy several times,” she said, describing the missionary as very friendly. She also said he wasn’t pushy in the beginning.

He also asked her about her culture and religion, but she soon realized he already knew the answers.

“He would ask these questions, so when he brought up his own beliefs, it wouldn’t be weird,” Rima said. “He was just preparing for what was to come and it wasn’t too long after that, maybe a month after that, he walked in with a Bible.”

She said he tried to show her similarities between Islam and Christianity, which she’d already known, from her own studies. Later, a fellow Muslim told her the man at Starbucks was a missionary.

Rima said her main concern is deceit and the lack of transparency, which has made her suspicious of the motives behind the establishment of Common Grace Coffee Company.

Another Muslim, who wanted to be called Tina, 22, said she always knew what to expect when she’d attended the Arab International Festival as a child. Missionaries would hand her Christian storybooks every time.

She said it didn’t bother her or her parents, because the missionaries have the right to practice and preach their faith. She added that the fact that they were open about their mission made it easier for her parents to educate and warn her.

“Muslims don’t have a problem with people who are practicing other faiths or who admit they are missionaries,” she said. “The problem is with those who try to hide it, deceive the vulnerable or attack others’ beliefs.”

Father George Shalhoub explained that the nature of the church is to evangelize, basically educate, in order to maintain the Christian faith.

“The other aspect of the church is to be a missionary,” he said. “…Without this mission, Christianity would’ve died in Damascus, so it was the missionary that came out of Syria that converted the entire Roman Empire, the people of the gentile, or as we call them, the heathens, to Christianity.”

In the past, most orthodox Christians lived under the Ottomans in the east, he said. They were forbidden from preaching, teaching, building a new church or even repairing an old one, which restricted the act of missionizing.

Shalhoub said they still proselytized through other Christians, but no one was able to missionize the Muslims because of that constraint. He said those who tried to hid their work in fear of persecution.

On the other hand, he said that “Islam is facing a new phenomenon in the West.”

“If you find that someone is being converted out of their own good will, that’s one thing,” Shalhoub said. “But they should not be deceived.”

He added that missionary work should not be hidden, it should be open. However, Christians should not impose their faith on their Muslim neighbors.

“The best missionaries in the world are those who live their faith, practice their faith, become a role model to others—without putting down others,” he said.

For his part, Sayed Hassan Qazwini said Muslims are not against freedom of speech and that people should be free to preach their religion.

Qazwini said it’s very clear in the Quran, “There is no coercion in religion. (Surah Al Baqarah 256).” He added that Muslims do not try to convert others.

“If we’re talking about educating others about our faith, we do that at our centers…” he said. “If I don’t offer an accurate understanding of my religion, someone else, a fanatic or extremist, will offer an inaccurate image of my religion and ultimately distort Islam.”

He said Dearborn has been a target of missionaries for many years, especially when the festival was held.

Qazwini said that if Muslim parents educate their children about their faith from a young age, they should not fear anything.

However, he does believe vulnerability and lack of immunity to be a problem.

“We, as Muslims, have been taught not to rely on rumors, but rather on facts,” he said, referring to the coffee shop controversy. “So the question is, are we sure that this is a place to recruit Muslims and turn them into Christians?”

He said the community has to be fair and just; but if the coffee shop turns out to be a place for proselytizing, he would advise parents to warn their children.