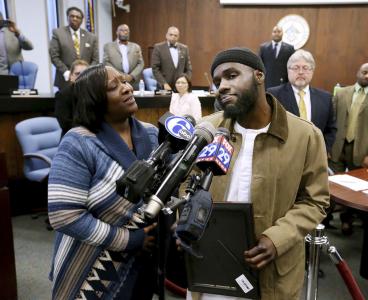 Atlantic City, NJ-A New Jersey man went viral earlier this week for stopping a fight between two teens, intervening “because it was the right thing to do.”

26-year-old Ibn Ali Miller was lauded this week for settling a quarrel between the two young men engaged in a fist fight through an effort that resulted in a reconciliatory handshake between the two fighters.

The video, originally posted to Facebook on Monday, received over 28 million views and Miller’s efforts were widely praised, including a heartfelt Twitter accolade from LeBron James.

So dope!!! #Salute the homie who stepped in and spoke real to our young generation. We all need a word or 2 to help! https://t.co/hJ4BT611sw

“Sometimes when you’re young like that, and you lose a fight in front of your friends and it goes on Facebook, it could hurt you for a long time,” Miller added.

Miller was driving Monday, returning from errands when he happened to notice a congregation of teenagers on the street. Concerned, he exited his car to approach the crowd, only to come across an impending fight.

“I ain’t leaving until you shake hands,” he can be heard saying to the two boys in the video.

Miller, a contractor, believes his actions are not to be considered exceptional.

“I’m a Muslim. I was raised by Muslim parents. That’s what we were taught in my house, always, growing up,” he said. “For me, I don’t look at it like I’m a peacemaker. I did what I was supposed to do, what I was raised to do.”