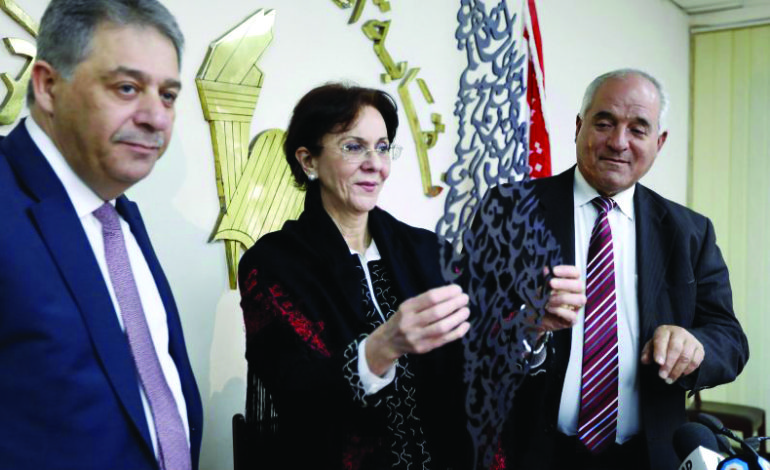 Palestinian ambassador to Lebanon Ashraf Dabbour (L) stands next to U.N. Under-Secretary General and ESCWA Executive Secretary Rima Khalaf as she holds a gift she received after a news conference announcing her resignation from the United Nations in Beirut, March 17 - Photo by Reuters

The trepidation journalists, officials, and workers of non governmental organizations (NGOs) have to operate under in reporting on Palestine and Palestinians under occupation is not a phenomenon limited to the United States. Worldwide, Israel’s hegemonic hold on an international political narrative leaves officials tasked with defending human rights and delivering honest reportage on the humanitarian conditions within nations incapacitated from doing their job.

Rima Khalaf, a Jordanian national who served as executive secretary of the United Nations Economic and Social Commission for Western Asia (ESCWA), was reminded of this the hard way early last week.

After she and a colleague published a report that objectively exposed the obvious injustices Israel has been imposing upon the Palestinians for decades, Khalaf was coerced into withdrawing the report and removing it from the ESCWA website.

The UN-ESCWA report, by levying the charge against Israel for having “established an apartheid regime that dominates the Palestinian people as a whole”, does not violate any codes of conduct for a human rights organization whose official mission is “international cooperation” and is tasked with working for the human rights of all people.

The report, supervised by servile experts in human rights, is a rehash of the generations of Palestinian oppression that nations and international bodies with a sliver of conscience have gradually come forth to condemn.

Opposing war crimes, illegal settlements, occupation and displacement should not be controversial within a universal body whose mission is to oppose such crimes against humanity. When even Ehud Barak called upon Israel in 2010 to “make peace with Palestinians or face apartheid”, calling Israel out on its policy disasters can no longer necessarily be classified as part of an overtly pro-Palestine agenda.

Rather than condemn the actions detailed in the report, the United Nations went ahead and condemned the investigator and reporter.

The fact that Khalaf’s report raised controversy is an ironic contrast to the U.N.’s response to Saudi Arabia. Whereas the former faced a penalty for upholding the alleged mission of the United Nations, the latter disparages human rights daily through its systematic assault on human rights both within and outside its borders.

Yet it was Saudi Arabia that was rewarded with a chair on the Human Rights Council in 2015, winning reelection to its seat following an 18 month assault on Yemeni civilians.

Secretary of State Rex Tillerson joins Israel in crying “bias” against the report despite both having been seasoned witnesses of Israel’s assault on Gaza and the West Bank.

Though Rima Khalaf was widely pressured by these voices, namely U.N. Secretary General Antonio Gutierrez, she stood steadfastly on the side of justice against the side of blind obedience and compliance.

Her decision to resign was an act of dignity for Arabs who have accustomed themselves, for years, to bending over and bowing to governments and nations that have kept them subservient.

Her decision to resign was an act of defiance against the revisionist tall tales of an “alternative-facts” era where human rights are not honored in an international agency for human rights. The Khalaf report was one of the facts furthered by a refusal to conform to a hackneyed pro-Israel narrative.

Yet, primarily, Khalaf’s decision to rescind her position is an act of resistance against the mainstream U.N. narrative, heavily levied and lobbied by the U.S.’s veto power that has consistently placed Palestine and the Palestinians last.

If the United Nations is to maintain its commitment to upholding peace and justice as a representative of the international community, its stances must reflect the values of the disenfranchised it allegedly serves.

If the Arab nations were vested in retaining an ounce of their dignity and representing their constituents, they would laud Khalaf for finally saying and exposing what they should have exposed for nearly seven decades.