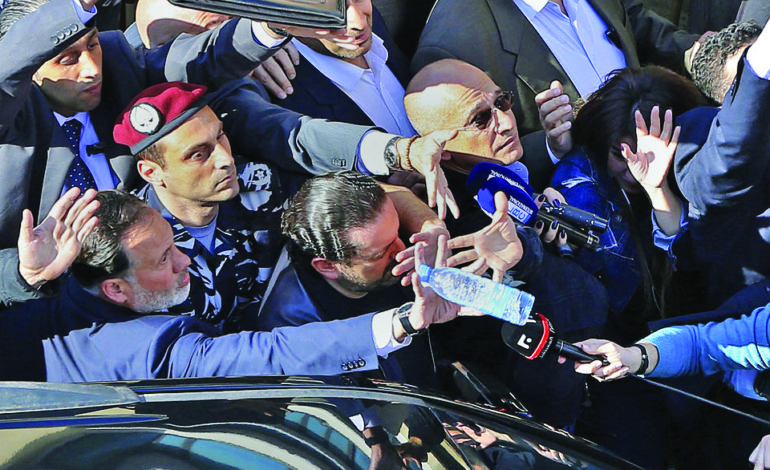 DEARBORN — Amid proposed tax hikes in Lebanon that have citizens in a fury and the parliament paralyzed over clashes about finding an antidote to commonplace inadequate public services, local Lebanese Americans are increasingly becoming disenchanted with reconnecting to their homeland.

This reluctance prevails despite an ongoing mission by the Lebanese government and the county’s consuls and other diplomats based in the U.S. to get more expatriates to visit, invest and participate in their homeland’s political process.

As Prime Minister Saad Hariri exited his armored vehicle, surrounded by more than 2,000 demonstrators gathered in Downtown Beirut on Sunday, March 19 to challenge shady public-private contracts that have stifled wages, protesters hurled water bottles at the Future Movement party leader while bodyguards shielded him with their arms.

“It’s true there is waste and corruption in the country, but we will fight it,” Hariri told reporters, while attempting to calm protesters.

The impassioned riot is the latest in a string of upheavals, including 2013 demonstrations that demanded wage raises for teachers and 2015 outcries against the mismanagement of waste that piled into mountains of garbage.

Ali Jawad, who founded the Lebanese American Heritage Club (now Leaders Advancing and Helping Communities) in the early 80s during a mass migration of Lebanese to Dearborn, said many in the community are disheartened by the financial and environmental turmoil that has plagued what was once a tourist hotspot.

“The death rate is high and everything is contaminated,” he said, pointing to the already-prevalent daily electricity and water outages.

Jawad added that the strained living conditions discourage businesses from continuing investment in the country, causing unemployment to skyrocket and are leading working class Lebanese and youth to flock to embassies and seek better opportunities and education elsewhere.

“People in Lebanon cannot take it anymore,” he said. “What else do they have but to fight?”

However, while Jawad said the citizens’ concerns are legitimate and voicing them loudly is essential for change, he condemned turning violent during protests and urged the politically divided people who tend to be adamantly loyal to political factions to unite in organization against the country’s elite instead.

He said that while American taxpayers reasonably expect to immediately or eventually receive services in return, Lebanon has failed in its duty to meet the basic needs of its people, who all the while pay taxes. Mohamad Ozeir, an Arab American activist, urged Lebanese citizens to not heed reactionary answers to non-solidified proposals in the parliament and cautioned against impulsively trusting promises by leading politicians representing factions with deep sectarian divisions.

He said while people’s hardships piling up ignited a warranted protest, Lebanon’s various party leaderships often finds ways to infiltrate or dissolve a cause to flip blame against another faction.

“Everything is politicized,” Ozeir said. “And you do not know what the motive is anymore.”

But he added that the Lebanese people have gotten used to empty promises and have grown cynical of the political process and their ability to squeeze out an establishment perpetuated by nepotism.

“If the Lebanese there are like that, how do you think people are like here?” he asked.

Hussein Elhaf, a local representative of the country’s Amal Movement political party, said many Lebanese Americans have recently withdrawn from their plans to travel to their homeland because of the deteriorating infrastructure, and feel like participating in the political process by registering to vote is a “lost cause.”

He added that as the party’s Michigan chapter focuses on connecting local members with immigration and social services, a remedy to bureaucratic gridlock in Lebanon would be to foster stronger relationships between the two countries through economic and education initiatives that incentivize traveling and becoming entrenched in civic society there.

That is among the goals of the Lebanese Consulate in Metro Detroit, which serves Lebanese nationals throughout the Midwest.

Bilal Kabalan, the Lebanese consul general, said because 20 percent of Lebanese are under the poverty line and many young people do not a see a future of owning a home or settling down, it is not surprising frustrated protesters would turn aggressive.

The proposed tax hikes, which have yet to become law, would increase a 10 percent sales tax to 11 percent.

Kabalan explained that the tax, dubbed “TVA”, was suggested by the World Bank in the mid-90s as a way to counter balance the national deficit. He said it largely has not helped, because of tax loopholes used by individuals and enterprises.

“Everybody in the political spheres agrees that corruption and mismanagement is the main reason for the lack of money,” he added.

He said that’s what the new tax laws would attempt to address. Average consumers would not be affected, Kabalan said. However, those with large savings in banks in Lebanon who profit via accrued interests would be taxed.

The laws would also impose a property tax on residents who own a second or third home, as the purchases are looked at as investments.

The consul said that many developers and citizens living outside the country own several homes and declare non-occupancy status in order to evade property taxes. At the same time, a relative often lives there or the owners occupy their home during a summer visit.

Kabalan pointed to two methods to fund the government – one is by taxing people and the other is to reduce taxes enough to push the economic cycle to encourage more investment.

One sure thing, he said, is that negative propaganda and the political factions’ conflicting agendas have thrown leaders out of touch with Lebanese citizens.

“The parliamentary committee should have to listen to people,” he said of the cabinet debating the new tax laws. “The mass is so discontent with what is happening, but the domestic scene does not allow for any kind of struggle.”