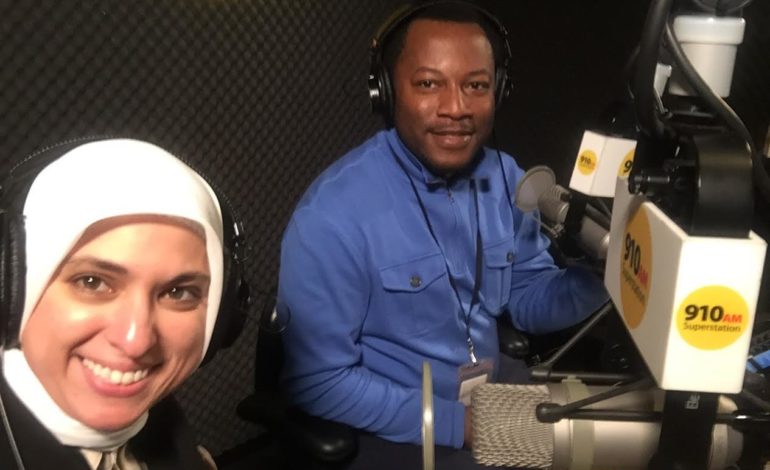 DETROIT— Detroit native and community organizer Fatima Salman plans to tell the community’s stories as the host of 910 AM Superstation’s show “Between the lines”, which starts March 26. The show will air each Sunday from 11 p.m. to 1 a.m.

“I’m not in any way, shape or form involved in broadcast journalism or any of that stuff,” Salman, 39, told The AANews.

Salman holds degrees in both social work and community organizing from the University of Michigan. She is a member of the Michigan Muslim Community Council and the executive director of the Muslim Students’ Association National.

She said she attended President Trump’s Feb. 28 address to Congress as the guest of U.S. Rep. Brenda Lawrence (D-Southfield), which led to her opportunity to become a radio host.

“It was there that a Michigan congressman’s wife met me and suggested my name to [910 Superstation CEO] Kevin Adell,” Salman said.

She said Adell told her the Muslim and Arab communities need to have a platform to share their stories and discuss what’s going on in the current political and social climate.

“So that is how this whole thing happened,” Salman said.

According to the station’s press release regarding the new show, Adell expressed his belief in Salman’s ability to advance the station further in its inclusion efforts.

“910 AM Superstation has many different personalities with different ethnic backgrounds on its airways,” he said. “Fatima’s arrival helps to further the platform of inclusion and I am excited about this new show.”

Salman’s inclusivity as a Muslim born to Indian parents crosses borders as she has been involved with the Arab American community and is married to a Syrian American. She learned Arabic in Syria and speaks it very well.

She was one of the four organizers of the Jan. 29 rally against President Trump’s first Muslim ban at Detroit Metropolitan Airport.

Before taking the offer, Salman said she’d always pondered the question, “How can we get our voices out to the movable middle, just regular mainstream America?”

She’s optimistic that this could be a way to do so because the radio station is a mainstream platform.

“One of their taglines on the actual radio show says, ‘By any means necessary’…” Salman said, adding that she found it so interesting that it includes a phrase associated with Malcolm X. She said she realized “how perfect” it would be to have his daughter on the show.

Salman’s goal is to interview as many guests as possible.

“The whole thing is how do we get our voices out?” She said. “And that’s by introducing really cool people who are doing really neat things in the community.”

She said people are welcome to suggest guest speakers and can contact her on the show’s Facebook page “Between the lines”, which she’s setting up soon.

They can also email her at fatima.salman1@gmail.com.

“It’s not my profession,” she said. “It’s not my field, but at the same time I’m excited for it.”

She added that most of the people she’s spoken to have been supportive and said that they’ve been waiting for something like this to happen.

“I’m praying that this is the answer to our prayers,” she said. “And, that this is a way to get our voices out to the world and talk about who we are.”

However, she doesn’t plan on addressing Muslim and Arab American issues only because she cares about more than just that.

“I care about a lot of things,” she said. “I care about education in Detroit; I care about women and leadership and so many things… I want the rest of America to realize that we care about everything, just like any other American.”