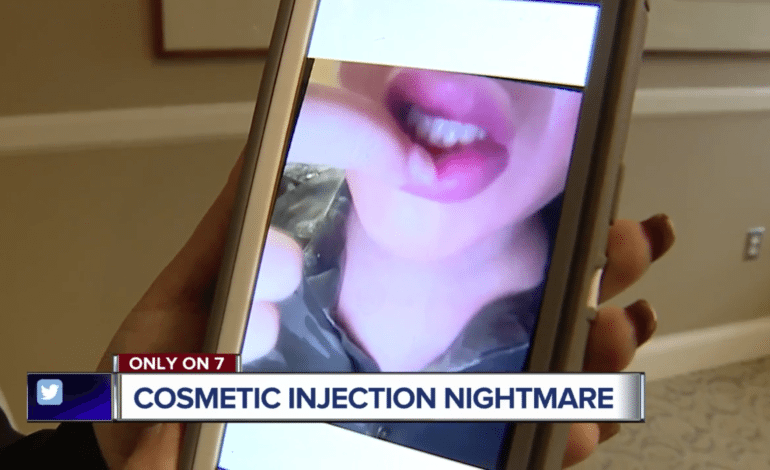 “They swell up, canker sores… and it’s just bad,” the woman, named Sue, told WXYZ Detroit. “And it’s just something I have to deal with for the rest of my life.”

A year ago, Sue, who did not want to go by her full name, became interested in Juvederm lip injections because of an advertisement at European Tanning Club & Hair Design.

She told WXYZ the Dearborn Heights salon was offering the injections by an in-house esthetician for less than half the price of what plastic surgeons usually charge. But after buying into the bargain deal, Sue felt something was off.

“My lips [didn’t] feel right, and I had, like, a cut,” she said, adding that the esthetician told her the reaction was completely normal.

Eventually, Sue checked with Dr. Ayoub Sayeg, a plastic surgeon, who saw some red flags that led him to send Sue for more thorough testing.

“I went and did an MRI…when the results came back, it showed that I did have silicon,” she said.

Sayeg told WXYZ that when silicon is injected into the lips, it can lead to serious complications.

He added that the silicon doesn’t leave the body.

“This stuff doesn’t come out,” he said. “You have to actually excise it. It means I have to take out muscle and tissue. It becomes a major problem.”

The business card of the salon esthetician has no physician named, but the owner’s attorney told WXYZ the plastic surgeon’s name is Dr. Tayfur Ayalp.

In a statement , Ayalp denied overseeing the operation.

“I would have never allowed an esthetician to do injectables outside my office,” he said. “I have no affiliation with any salon or any esthetician at this time.”

“[[The customer]] engaged our salon for a lip injection that was overseen by a licensed physician, and administered by a licensed aesthetician; and the injection was of a product that is approved by the FDA,” salon management said in a statement, in response to questions from WXYZ.

The State Department of Licensing and Regulatory Affairs is investigating the salon.