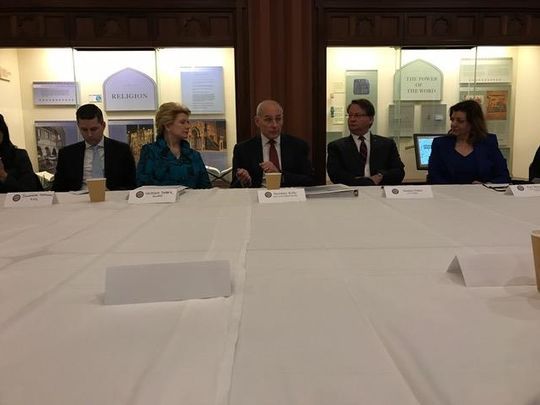 DEARBORN – A meeting on Monday, March 27 with community activists and Department of Homeland Security Secretary John Kelly turned antagonistic, when a local attorney and civil rights advocate pressed Kelly about orders and harassment that target Arabs and Muslims.

The meeting, held at The Arab American National Museum, was a second for the DHS after former Secretary Jeh Johnson had the opportunity to hear similar concerns at the University of Michigan in January last year.

But as the heated political climate toward Arabs intensifies, so has the discord between federal officials and the community.

At one point during the Monday forum, Secretary Kelly became irritated and prepared to leave when Nabih Ayad, founder of the Arab American Civil Rights League, suggested the Customs and Border Protection implement an “accounting of anybody stopped, questioned or turned away,” which would work similarly to body cameras on police officers.

“He was upset right away. He got up and said ‘my agents are doing a good job, I don’t have to take any of this.  I’m leaving until you stop asking the questions,’” Ayad recalled of Kelly’s response.

The civil rights attorney added that Kelly “immediately became resistant,” continued to reject allegations of harassment of Arab and Muslim Americans at airports and defended the professionalism of ICE and CBP throughout the meeting.

“These are not allegations,” Ayad said. “We live them every day. If you’re not willing to talk to us, then the next route is not having anything accomplished.”

David Lapan, a DHS representative who was at the meeting, later said in a statement that “One participant in a meeting with leaders of the Arab American community incessantly pressed the Secretary, incorrectly alleging that DHS officials engage in targeting and racial profiling of Arabs and religious profiling of Muslims. “Secretary Kelly reiterated that CBP and ICE officers carry out their duties professionally, humanely and in accordance with the law, noting that they do not target individuals based on race, religion or political views.”

The meeting proceeded with Fay Beydoun, executive director of the American Arab Chamber of Commerce, discussing the business impact of the Trump administration’s travel ban in the community, and with Mike Jaafar of the Wayne County Sheriff’s Office regarding damage toward promising local efforts in strengthening ties between law enforcement and Arab Americans.

Hassan Jaber, executive director of ACCESS, was also among the meeting’s participants and told The AANews he thought Ayad’s questions were fair and represented the true sense of fear and frustration of the community.

“We need to speak honestly about community concerns, and we need to be real and reflect the fear of the community in asking what is fair,” Jaber said.

He added, however, that Arab Americans should expect “much harder times” from the Trump administration, but that should not discourage them from remaining engaged in the political process.

Jaber recalled saying to Sec. Kelly during the meeting that innocent Muslims are victimized when the administration defines the problem not as a threat from ISIS and al-Qaeda, but in Islam itself.

He said the secretary agreed and said a national conversation should take place about the matter.

Kelly was also open to the idea of placing body cameras on ICE and CBP officers, he said.

Jaber also lauded U.S. Senators Gary Peters and Debbie Stabenow, who were also part of the discussion, for their continued support and important roles in representing the community’s concerns.

Senator Peters told The AANews the meeting was constructive and acknowledged there should be a system that holds immigration officers accountable for discrimination, but said there was no evidence that his office could act on.

He said he and Kelly met with an organization of Middle Eastern federal law enforcement officer called MELOA who denied engaging in harassment or targeting of minority communities, and echoed Sec. Kelly’s trust for immigration officers.

However, he urged activists to present his office with “actual cases of individuals who were wrongly treated” and provide details.

“It is corrosive to a community that believes they are subject to this type of scrutiny,” Peters added. In 2014, a leaked FBI report published by The Intercept revealed that Dearborn had the second most residents, after New York City, on the terrorist watch list.

As a result, the ACRL started a hotline, 1-844-CANT-FLY, for Arab-Americans impacted by the Terrorist Screening Center.

Peters also blasted the DHS’s announcement to punish sanctuary cities, those who chose not to cooperate the federal departments about the immigration status of residents, by cutting off funding.

“Cities should not be punished for [failing to fulfill] the government’s responsibilities,” Peters said.

He added that local municipalities are already financially stretched with providing basic services to constituents and the law would enforce an unfunded mandate on cities. Instead, the focus, should be on funding cities to remove criminals and felons.

Fatima Salman, a representative of the national Muslim Student Association, spoke to Kelly at the meeting about the identity crisis many Muslim American youth are facing.

“We are being ostracized and made into something we don’t actually belong,” Salman told The AANews.

The activist said she told Kelly about her faith and citizenship never being at odds with each other growing up. Today’s Muslim youth, she explained, never hear the president say anything positive about Muslims in America.

The basis of extremism itself, she continued, is caused by feeling of isolation and not belong to a community. The Trump’s administration’s outlook is paving the way to exasperate the problem, she told Kelly.

Salman said she had a one-to-one conversation with Sec. Kelly after the meeting, where she asked why policy is not reflecting his agreement with some of the negative impacts from of the executive orders.

During a press conference later that day at the CBP’s facility near the Ambassador Bridge, Kelly said that targeting of immigrants is not taking place, regardless of the reports.

“Every single time a foreigner or American citizen comes into this country — and there are millions every day — they generally move straight through the process. A very tiny number are set aside for additional screening. That’s not based on religion, color or politics, and I reject anyone who makes that claim.

“The conversation today revolved around … how … we look very, very hard at terrorism (and) terrorist initiatives. Generally speaking, I think they were most interested in hearing from someone who has this job and makes no distinction between race, color and politics. It’s all about protecting America.”

Earlier that morning after arriving at the Detroit Metro Airport, Sec. Kelly met with a group of leaders from the Latino and Chaldean, communities, were similar contentious exchanges reportedly took place.