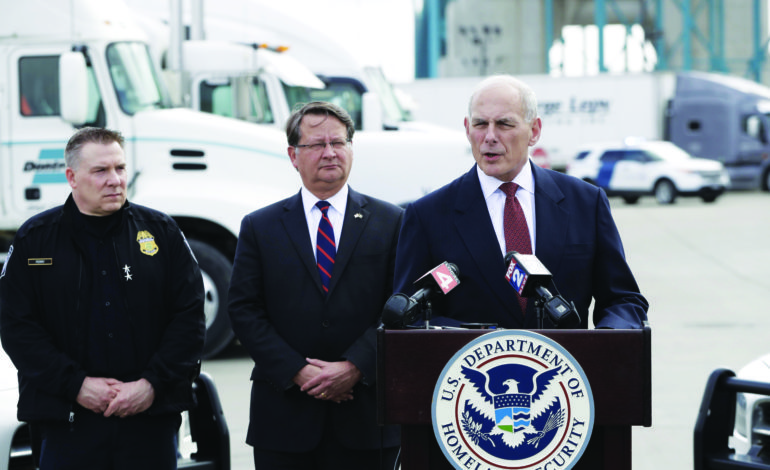 In a meeting Wednesday at the Arab American National Museum in Dearborn, Department of Homeland Security (DHS) officials arranged to meet with Arab and Muslim community activists and leaders under the pretext that those communities would be represented and heard.

The subtext that unfolded throughout the course of the contentious meeting revealed that the DHS was looking to represent itself, showing up to subdue Arabs, Muslims and Latinos once again.

From the start, the Arab community was not given a chance to even choose their representatives at their own meeting.

In fact, several community leaders were unjustifiably blocked or not even invited to the meeting, including Dawud Walid, executive director of the Council on American Islamic Relations (CAIR-MI); Nasser Beydoun, chairman of the Arab American Civil Rights League (ACRL); State Rep. Abdullah Hammoud and even U.S. Rep. Debbie Dingell (D- Dearborn), an effective, tireless representative of the community whose district includes Dearborn, which is the home of the largest concentration of Arabs and Muslims in the country.

This righteous indignation, manifesting itself through an hour long standoff between the communities and DHS, culminated into threats from DHS Secretary John Kelly to leave the meeting after a community civil right advocate accused the department of targeting members of their communities, according to meeting participants.

“I’m leaving unless you decide to stop your questions and have someone else ask a question,” he was reported saying by civil rights leader Nabih Ayad, ironically to an assembly gathered to ask questions and present issues on behalf of a beleaguered community that is constantly harassed at border crossings and ports of entry.

Yet the DHS’s resistance to hearing the facts, routine experiences of Arab and MuslimAmericans they are in place to serve, proved to be a microcosm of an Islamophobic administration characterized by a disregard for its constituents rather than a servitude towards them.

During the discussion, Secretary Kelly’s lexicon was not short of an insular defense of militarism, refusing to acknowledge that any of his “men” were engaged in the routine and systematic targeting and profiling of Arab and Muslim Americans.

In continuation with the “alternative facts/ alternate reality” hailed by the current administration, the retired general vehemently denied that, in fact, Arabs and Muslims are routinely the target of such harassment.

“Every single time a foreigner or an American citizen comes into this country, they generally move straight through the process,” Kelly told reporters during a press conference later that day. “A very tiny number are set aside for additional screening. That’s not based on religion or color or politics, and I reject anyone that makes that claim.”

Additionally, Shibly reminded Muslims that under secondary inspections, the disturbing and discriminatory religious profiling questions too often have been brought up.

These personal inquiries often ask their subjects intrusive questions about their beliefs, a practice he says is unconstitutional.

Secretary Kelly, as he got up in the midst of the discussion, did not feel like he had to “take any of this.” Arab Americans, too, should no longer have to endure the incessant profiling, misrepresentation and targeted surveillance by our federal and local agencies.

Arab Americans and American Muslims should not have to take the silencing of their voices from within their own spaces; nor should the community tolerate the blatant disrespect shown to our community leaders and activists.

Finally, The Arab American News thanks Senator Gary Peters (D- MI) for arranging the meeting; and we applaud Rep. Dingell for being very instrumental in taking our issues to Washington and for her tireless efforts in standing with our community.

Ironically, the meeting was called to allay the real and imminent fears of Muslim Americans living under the Trump administration. In reality, Arab and Muslim Americans, along with their Latino counterparts, suffered through an ordeal that embodied their systemic marginalization.

The meeting, intended to address issues and concerns, could not get past a department of an administration tasked with solving a problem it could not recognize in the first place.