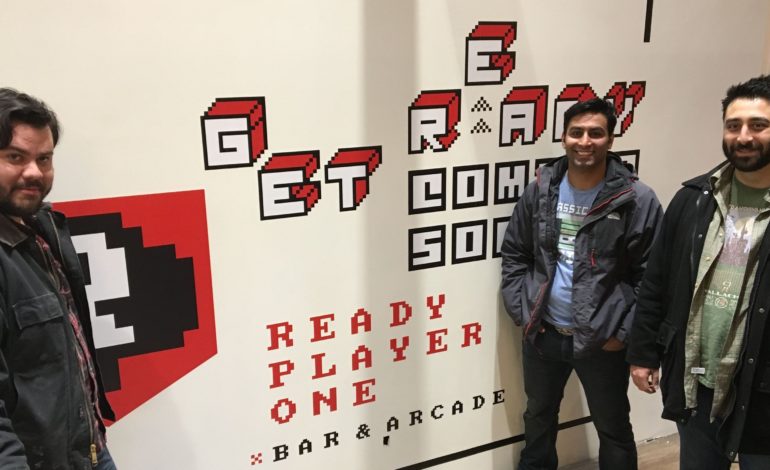 DEARBORN— THE AANEWS sat down with Mohamed Badaoui and Wael Gharbie, two Dearborn residents set to open their new arcade bar, Ready Player One, in the Globe Tobacco Building in Greektown in April. We asked about their idea, the process and their prospects for the arcade and restaurant that brings together all with a love for video games and good food.

THE AANEWS: How did this idea start?

Badaoui: Wael and I met during high school and became good friends, played video games together. Then, after high school, he went to school to be a firefighter and I moved out to Iowa [for] a job opportunity to open up a bunch of pizzerias and run them and do my thing out there. That was in 2008. In 2014, I moved back to Michigan and Wael and I started to hang out again. So we started going through a whole bunch of business plans and we had read about a bunch of different bars and arcades. So, like, Detroit doesn’t have one.

THE AANEWS: So an arcade bar is what you were originally thinking?

Badaoui: We were thinking of something that had to do with video games and eating and drinking. And then we chose arcades because they’re really cool; and then that’s how it started.

Badaoui: We started this in 2015 officially, but this has been boiling since 2014.

THE AANEWS: What happened between 2015 and it really taking off two years later?

Gharbie: Initially, when we started, we had to, from an idea, [decide] where do we even go? It’s a lot different from a franchise getting some structure on how you do things. So first thing you do is to have a plan. So, we went online and we made a business plan and once that was completed we contacted the banks to [figure out] how to get a loan and eventually we got a loan. From there, that’s when it just started, of finding a place, the equipment, finding the suppliers, every little thing to open up a bar from the ground up.

THE AANEWS: What do you hope that Ready Player One brings to the area?

Badaoui: A place for entertainment.

Gharbie: A new form of entertainment. You go, really, anywhere and ask yourself, ‘well there’s a million places to eat. So, what do you do downtown if you don’t want to [just] eat or drink?’ There’s really nothing to do down there if you’re not working down there. So we’ve been to these bar/arcades in a couple different states, they’re always packed, they’re the new thing.

Badaoui: And Detroit was the perfect place to do it.

THE AANEWS: What are some other plans for RPO?

Badaoui: We’re going to have 40 machines in there [and] we’re planning on having events there. Those events can be anything from video game tournaments to maybe trivia nights.

Gharbie: The goal is to hold some of them for groups that want to come in for private events. After our initial opening, when things die down a little bit, [the goal] is to open that up. So, if groups want to come in and rent out the space from Monday to Thursday, they can do that. As far as us holding events, you know, as he said, tournaments do that; and whatever we can think about after things die down to keep people excited about what, we’re doing.

THE AANEWS: What were some of the biggest challenges in bringing your idea to fruition?

Gharbie: With anything like this, especially a start up, the easiest one to say is funding. But once we figured that out, everything else was really the build up process. Getting permits, getting things approved, the blueprints, just the process. It would be different if we were in a building with a kitchen with things already run. But just going from a blank space to literally every kind of thing you can think of from lighting to flooring…the build up process was definitely the toughest for me.

Badaoui: And the building being over 100 years old, wasn’t really many precedents set to what could be built today. It was a bit trickier, but it made it a lot cooler.

THE AANEWS: What’s the story behind the decision to open it up in the old factory?

Badaoui: It was suggested by [commercial real estate firm] Bedrock, really. It was a beautiful old spot.

Gharbie: The whole process with the landlord was more that they had an idea of what they wanted to happen in the city and pitch a business plan; they thought it was a great idea and from there they suggested it. They had a couple buildings in mind, but once we saw it, we loved it, we loved the aesthetics. It used to be an old tobacco factory, so it’s a historic building. So things like heavy timbers, exposed stone, it really had a nice old school look where we could put these retro games without us having to change much.

THE AANEWS: Coming from Arab Muslim backgrounds, were there any reservations about opening up a place that served drinks?

Badaoui: There’ll be people that won’t be happy for us, but anything you’re going to do there are going to be those people for one reason or another. We’re going to have our haters.

Gharbie: Right, I’m not too worried about people judging us. At the end of the day I’m going to do what’s best for me and my family and I don’t care about other’s thoughts on that. There’ll be more positives than negatives and more people liking our idea than judging.